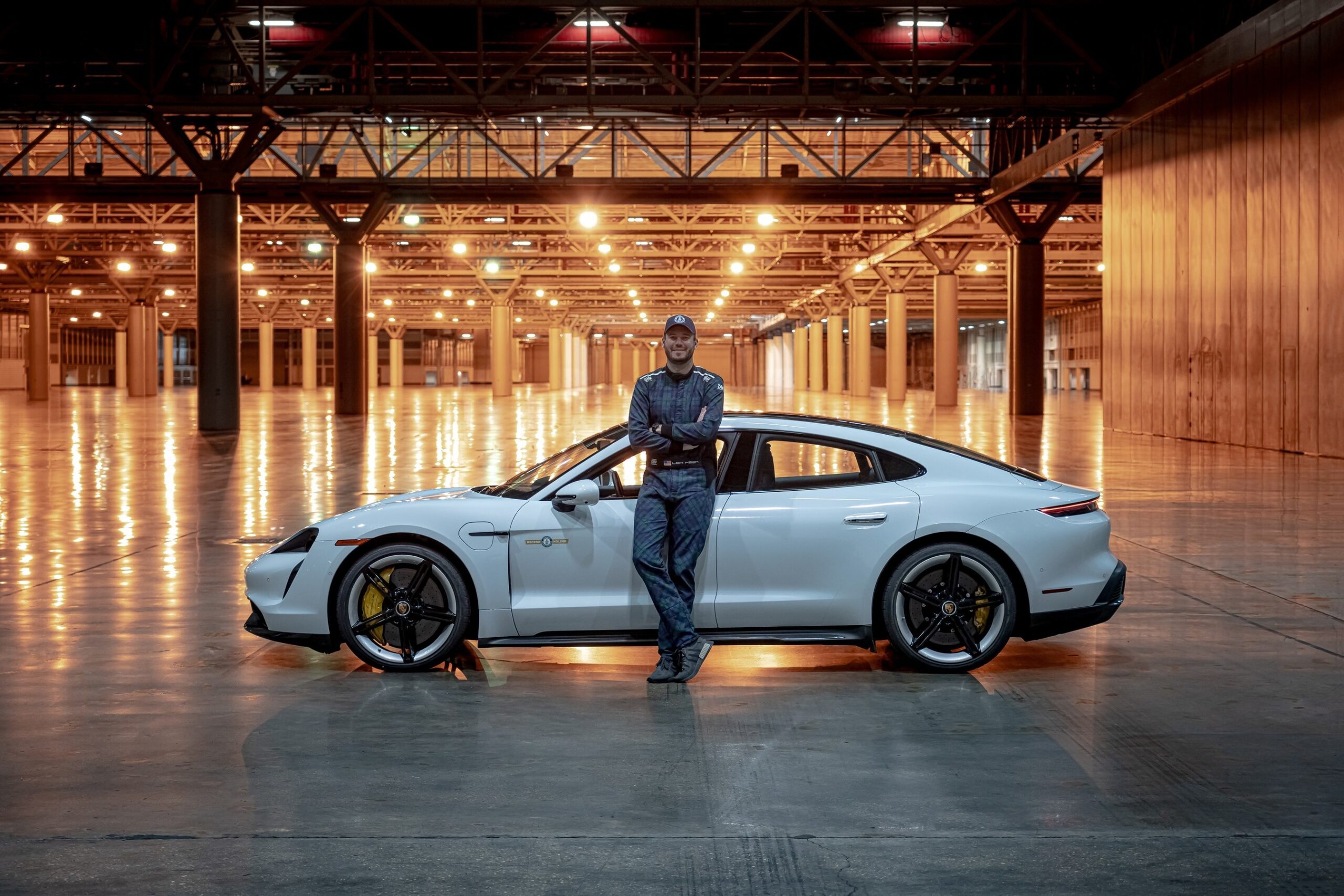 Recently, racer Leh Keen’s Porsche Taycan Turbo S was clocked by independent adjudicators at 102.6 mph inside the New Orleans Convention Center – a new indoor land speed record. Keen’s all-electric Taycan Turbo S has a maximum of 750 hp, with four-wheel drive to maximize grip, powerful carbon ceramic brakes and the ability to accelerate to 60 mph from a standstill in just 2.6 seconds. And what’s more the record was set on the Taycan’s standard fitment original equipment (OE) tyres. But which tyres were used?

The Porsche Taycan’s standard tyre fitments are Pirelli P Zero Elect and Hankook Ventus S1 evo 3 ev electric vehicle tyres supplied in size 225/55R19 XL 103Y on the front axle and 275/45R19 XL 108Y on the rear axle. It’s not easy to see, but looking closely at the top-right of the front wheel on the official imagery reveals what appears to be a P Zero print on the sidewall. Meanwhile, looking at 8 o’clock position on the rear axle tyre, there is a barely discernible Pirelli logo. Put the two together with the knowledge that Pirelli is one of the two main OE tyre suppliers and our money’s on Pirelli being the record-brake tyres equipping the Taycan’s record braking run.

“I didn’t really appreciate the scale of the record attempt until my first exploratory run. The surface is so unpredictable, so slick, that you have to have complete trust in your car. It truly was like ice – and you’re accelerating flat out, facing a really hard wall at the end. Suddenly, even in a massive space like the one we had, it seems very small,” said Leh Keen after his record attempt.

“I did take a moment on the starting line – knowing I was going to have to go as fast as I could, and stop again, all before reaching the wall I was facing. It got my attention. I used the car’s launch control and the Taycan just hooked up – the sensation of speed indoors, even in such a big space, is enormous – that wall rushed up fast. I was gentle on the brakes in the end – the Taycan’s brakes were more than up to the job. Of course, I didn’t look down at my speed so it came as a surprise and a relief that I’d beaten the record, and by such a margin. It was a rush! I’m thankful for Porsche for trusting my abilities and for their preparations and encouragement – 102 mph inside a building. What was I thinking?”

Electric cars perfect for millions, but are silent vehicles safe?

New research shows millions of Brits could benefit by switching to an electric vehicle – but a road safety expert warns many are still ‘silent killers’. More than four in five UK motorists – 34 million - could save cash and slash their carbon footprint with an electric, hybrid or plug-in hybrid model, claims a new report by What Car?.
Read Article

Solar panels and wind turbines move over, there’s a new source of electricity in town. It’s none other than the trusty tyre.
Read Article

motorsport calendar – the world’s first all-electric, multi-brand touring car championship. It’s called Pure ETCR, and it’ll be contested by vehicles equipped with a Williams Advanced Engineering battery unit and 500kW Magelec Propulsion powertrain. This will deliver the equivalent of a staggering 680bhp to the rear wheels, enabling 0 to 100km/h acceleration in just 3.2 seconds. This torquey power will reach the racetrack via products supplied by one of Pure ETCR’s founder partners – Goodyear.
Read Article

Top 10 factors that would make drivers buy an electric car

The top ten factors that would make a driver buy an electric car include trusting the technology, saving money, convenient and quick charging, and being able to travel a long distance on a single charge. The survey in January by Opinium of 2000 UK drivers, commissioned by InsuretheGap, a leading supplier of GAP (Guaranteed Asset Protection), reveals, however, that over half (57 per cent) of drivers are still too daunted by the issues around electric vehicles to buy one (men 54 per cent and women 59 per cent). Older drivers are even more likely to feel this (over 55s, 62 per cent, and 18 – 34s, 50 per cent).
Read Article

Large, powerful cars and SUVs with electric or hybrid drives are substantially heavier than conventional ICE-powered vehicles and thus need tyres that can handle greater loads. The solution is to fit tyres with a higher load index. The gold standard here is HL, or High Load. Continental has introduced the first passenger tyre with the new HL load index code, HL 245/40 R19 101Y XL. It is currently evaluating demand for further HL sizes.
Read Article