Reinventing the wheel: A brief history of tyres

It all began about 5000 years ago. To get to the tyre, manufacturers first had to work with the wheel. Humanity didn’t see that until the Bronze Age, or roughly 3,000 BC. Next was the axle and wheel combination that is central to vehicular operations today. So it is not too much to say that the development of tyre technology really was a question of reinventing or better still reimagining the wheel. With this in mind, here’s our brief history of tyres.

It wasn’t until the mid-19th century that tyres began to look like they do today. And that was thanks to the rubber vulcanisation work of Thomas Hancock (of the Charles Macintosh Company) in the UK and Charles Goodyear in the USA. Vulcanisation turned natural rubber from a useful but relatively weak substance into a more elastic and hard-wearing compound.

In 1845 Robert William Thomson wrapped several rubber tubes in a leather cover, hoping that the tubes would help a rotating wheel absorb the shock of the road, mirroring human muscle. But the design never took off.

From this point onwards, the tyre really got into its stride. In 1891, the Michelin brothers created the detachable pneumatic tyre and companies like DuPont sought to synthesise rubber, which helped broaden the performance possibilities of tyres.

At this point tyres were generally constructed according to the cross-ply design, which means the outer casing of the tyre was made up of criss-crossing layers of material. In 1947, the US-based Goodyear Tyre Company – named after vulcanisation pioneer Charles Goodyear – advanced the tubeless tyre to compensate for the industry’s oil usage. This effectively fused the tyre and tube into a single part by virtue of an inner-liner that made the tyre layers air-tight, removing the need for an inner-tube.

The invention of radial tyres was the next big step forward. This technological development superseded cross-ply construction on the basis that its consistently laterally wound (and therefore radial) casing offers better performance and fuel consumption. Nowadays, virtually all car and truck tyres in Western nations are radials. However, some argue that cross-ply tyres are more resilient to overloading and are more durable. Therefore, certain specialist, agricultural and industrial applications still favour cross-ply tyres. But it must be said that these remain very much in the minority overall.

There is some dispute about who popularised radial construction. But there is must less debate about the suggestion that Arthur W. Savage, a manufacturer based in San Diego, USA between 1915 and 1919, invented this design.

Most of this first phase of tyre development work was pioneered by the world’s oldest tyre manufacturers, many of which have been around for more than a century such as: Dunlop (established 1889), Michelin (also 1889), Continental (founded in 1874, but didn’t start making tyres until 1898), Goodyear (1898), Pirelli (founded in 1872, started producing car tyres in 1901), Sumitomo Rubber Industries (1909 bicycle tyres and tubes; 1913 automotive tyres), Yokohama (established 1917, first factory opened in 1920); and Bridgestone (1931).

There’s no question that the radial design really revolutionised the tyre business, but since then tyres have evolved even further with the development of seasonal tyres, high performance tyres, 4×4 and SUV tyres as well as low-fuel consumption, noise reducing and so-called intelligent tyres – to name just a few more technologies. 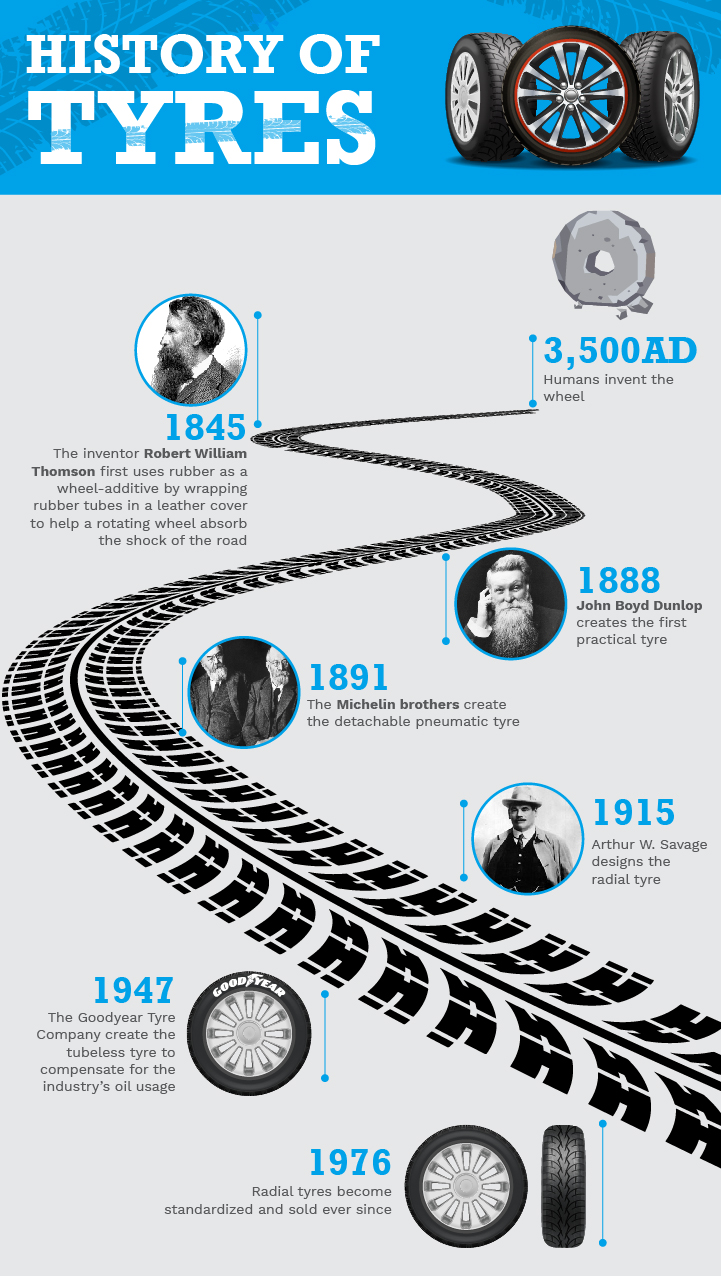 Car review website Carbuyer.co.uk says UK motorists have given space saver spare wheels and puncture repair kits an “overwhelming thumbs down”. When asking a sample group of more than a thousand motorists which characteristics of modern cars annoy them most, two out of three named the lack of a full-size spare tyre.
Read Article

You need money and expertise to perform a comparative tyre test. Magazines and motoring clubs therefore regularly collaborate with partners when testing. This is the case for German company car magazine Firmenauto, which bases its latest winter tyre test upon auto motor und sport’s recent evaluation. To give the test greater relevancy to its readers, Firmenauto added cost as a fifth test category.
Read Article