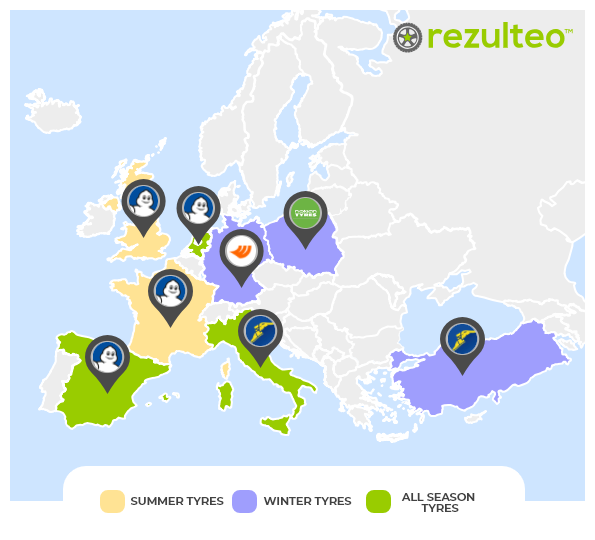 Rezulteo’s figures tell a similar story. From October to December 2019 the majority of Rezulteo users in the UK chose summer tyres (42,8 per cent), closely followed by all-season tyres (42,5 per cent). But this is far more than it has been in the past (see table below for further details).

Here, the Michelin CrossClimate and CrossClimate+ featured in first and fourth place respectively on the list of top five most viewed tyres at WhatTyre between December 2019 to January 2020. Two more were summer tyres, but – interestingly enough – the fifth most view product during this period was actually a winter tyre – the Continental WinterContact TS860S.

Most popular tyres online in the UK

Most viewed tyres at WhatTyre December 2019 to January 2020

WhatTyre’s data is based on viewing data from visitors to WhatTyre.com between 1 December 2019 and 29 January 2020. Here readers have access to over 240,000 different tyres from over 15,000 product lines.

According to the company, Rezulteo’s data is based on 21,347 chosen tyres from the Rezulteo websites in France, Germany, the UK, Italy, the Netherlands, Poland and Turkey for the period between 1 October and 31 December 2019.

What are all-season and winter tyres?

As the weather gets colder, road safety charity TyreSafe advises that driver make sure their tyres have plenty of tread depth and are maintained at the correct pressure. Of course, it is also good to keep the lights, windows and mirrors clean and free from ice and snow. And keeping wipers and lights in good working order is sensible too. But, sticking with your car’s seasonal footwear, what tyres are you driving on? Winter tyres, all-season tyres or summer tyres?
Read Article

The UK is preparing for one of the coldest winters in almost a decade, but new data shows many drivers are dangerously unprepared to drive in icy conditions and could be putting themselves and others at risk as a result.
Read Article