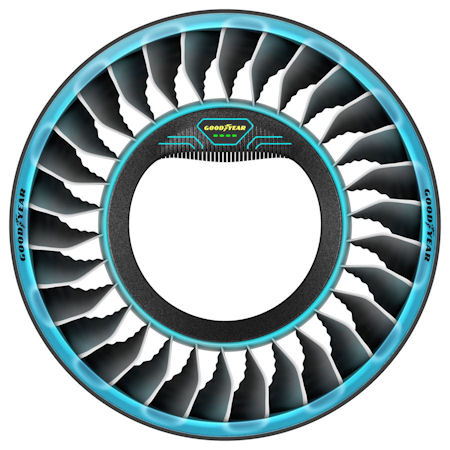 Cars in the sky, even DeLoreans, remain pie in the sky. But Goodyear will be ready should the flying car one day become reality. After showing earthbound motorists its concept for “autonomous, flying cars of the future” at the Geneva Motor Show in March, the tyre maker is presenting the Goodyear AERO to an entirely different audience at this week’s Paris Air Show.

The Goodyear AERO concept features a finned, turbine-like architecture and materials that lend themselves to use as both as a traditional tyre on the road and as a propulsion system in the air. While Goodyear makes it clear that the AERO is “a purely conceptual design”, it has already developed some of the featured technologies, such as its non-pneumatic structure and intelligent tyre capabilities. The tyre maker adds that other technologies used in the concept “might become the basis for new ideas and potentially new products in the future.”