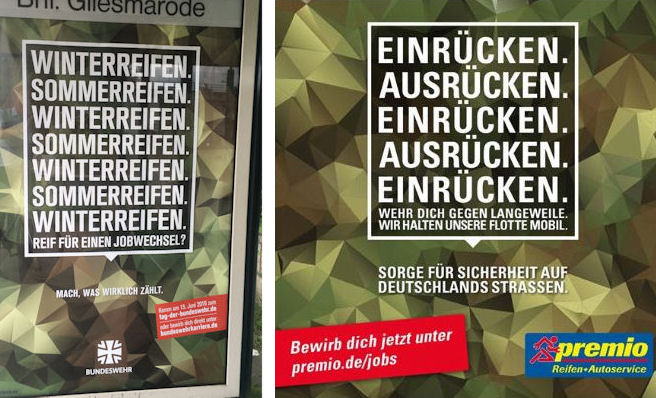 The tyre trade here in the UK may have to contend with Brexit and cutbacks in the automotive sector, but at least the army isn’t taking potshots at us. Spare a thought for tyre dealers in Germany, who’ve found themselves in the crosshairs of their country’s defence forces of late.

Tyre fitters are the apparent target of a recruitment campaign run by Germany’s Bundeswehr. Ads positioned in prominent sites such as bus stops paint a dreary picture of the tyre fitter’s lot. Mounting and dismounting summer and winter tyres from cars. Season after season after season. The ads then suggest that changing jobs may be preferable to changing tyres.

This has led to grumbling within the tyre trade. One German tyre dealer, Hamelin-based Frank Danger, called the ad campaign “hard to beat for tastelessness, audacity and cheek”. Complaining about this unfair slur against the tyre fitting profession, he commented that “even the Bundeswehr needs tyres that some ‘bore’ must mount.”

Defend yourself against boredom

Germany’s tyre trade association hasn’t objected to the ad campaign. It believes the Bundeswehr posters will make people think about changing their tyres. But Goodyear-owned fast fit chain Premio Reifen + Autoservice promptly fired a return salvo at the uniformed tyre dissers. In a poster of its own, Premio makes fun of the Bundeswehr’s embarrassing reputation for possessing a fleet of grounded fighter jets, tanks that are less than battle-ready and submarines confined to harbour.

“Defend yourself against boredom,” states Premio’s ad. “We keep our fleet mobile”. Premio takes the subject further on its Facebook page, suggesting that the Bundeswehr campaign aims to headhunt tyre fitters in order to bring some much-needed competence into its ranks. “Lieber vom Profi als von der Leyen!” – from experts rather than von der Leyen – writes the fast-fit chain in a dig at Ursula von der Leyen, the Defence Minister responsible for the Bundeswehr’s woes.

It is unlikely that this war of words will escalate into a more lethal form of bickering. But should both parties reach into their respective arsenals, our money’s on Premio and its army of tyre fitters standing victorious when the smoke clears.