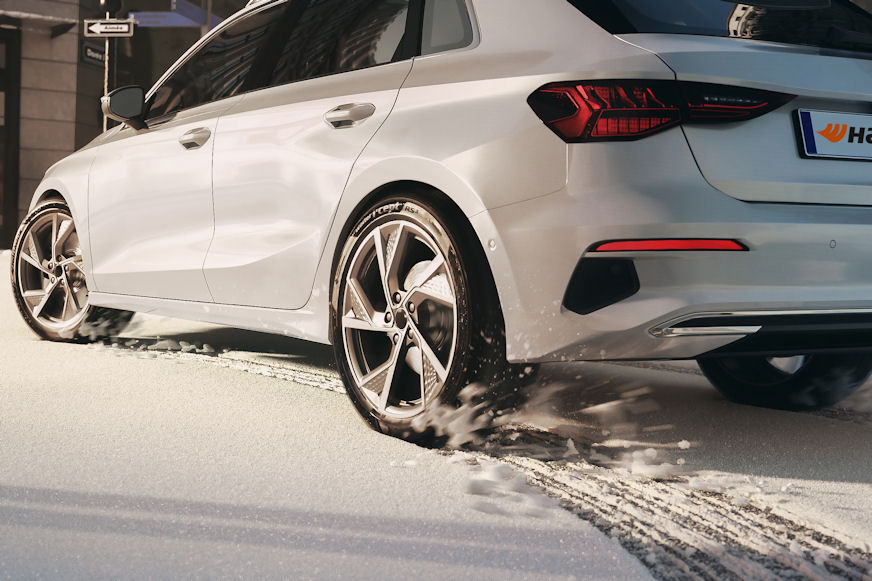 Developed as an improved version of the prior-generation Winter i*cept RS2, the new Hankook Winter i*cept RS3 arrives with the promise of shorter braking distances on snow-covered surfaces and improved handling on icy and wet roads. Hankook Tire says this “enhanced successor” uses the latest technologies to surpass the RS2 and “offer even greater levels of safety in everyday life.”

Hankook is selling 71 sizes of Winter i*cept RS3 in European markets, a range that covers car and compact SUV demand in the 14- to 17-inch rim size category. Four products within the line-up include the Hankook Runflat System, which enables continued driving in the event of a puncture – these tyres can be identified by the letters HRS.

Snow-covered roads can pose a challenge for both drivers and tyres. Hankook therefore increased the Winter i*cept RS3 shoulder area by including micro edges. It says this change improves both traction and lateral grip when cornering on snow.

The tread features an inverted ‘V’ pattern and this, together with 3D sips, provides more stable braking performance and shorter braking distances on snowy roads. Hankook claims that compared to the previous tyre, the Winter i*cept RS3 offers up to four per cent shorter braking distances on snow-covered roads. Grip and braking performance are also helped by sawtooth 3D sipes that minimise block movement.

The tread is stiffer for greater safety on icy roads. Testing conducted by Hankook indicates that the tread blocks are one per cent stiffer horizontally and three per cent stiffer vertically compared to the RS2 model. Drivers also benefit from significantly more grip even on ice.

Moreover, the Winter i*cept RS3 makes use of various technologies to effectively drain water from the tyre’s contact patch. The tyre maker states that this results in a high degree of driving stability, even on wet, muddy or slushy roads. As well as the wide V-shaped tread grooves, the individual blocks on the surface are crisscrossed with small grooves. This allows water to quickly drain away and noticeably reduces the risk of aquaplaning. The new, overlaid W tread pattern also helps with this, as well as offering better steering control in the rain.

An issue when using all-silica tread compounds is that the softness and grip they provide comes at the expense of mileage potential. Hankook claims to have resolved this dilemma by using a new generation of its ‘Aqua Pine Compound’ in the tread. By doing so, the tyre maker was able to overcome this trade-off and reduce braking distances on wet roads while cutting down on abrasion. Braking distances for the Winter i*cept RS3 are therefore up to seven per cent shorter on wet roads than for the predecessor tyre, while mileage is up to ten per cent better. The new material mix also provides an improved connection between the tyre and the road, thereby reducing slippage and increasing mileage.