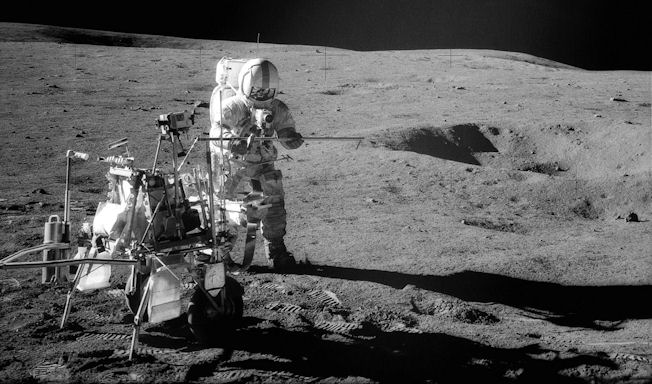 It’s unlikely your motoring future includes a moon buggy in the driveway, but a set of ‘space tyres’ may be just over the horizon. Goodyear is about to blast its tyre development off into orbit.

The tyre maker’s an old hand in space but has been earthbound for the past few decades. That’ll change next week with the expected launch of the SpaceX CRS-18 on 21 July. When it hitches a ride towards the International Space Station (ISS) within a Falcon 9 rocket, it’ll carry a Goodyear experiment on board. Goodyear says a successful outcome will lead to better-performing tyres in future.

Astronauts will study the formation of silica particles in the space station’s microgravity environment. The rubber used in car tyres frequently contains silica. By gathering knowledge from this evaluation, Goodyear engineers and scientists can determine if unique forms of precipitated silica could enhance tyre performance.

“Goodyear quite literally has gone to the moon and back to take tyre performance to new levels for consumers,” says Chris Helsel, Goodyear’s chief technology officer. “Space exploration has served as inspiration for so much innovation, and we at Goodyear are proud of our legacy of participation, which continues with this upcoming experiment in microgravity.”

Goodyear and the Apollo missions

The tyre maker’s relationship with space began in the days when crewcuts and Corvettes were de rigueur for astronauts. In July 1969, Goodyear supplied essential products for the Apollo 11 spacecraft. Goodyear brakes helped the missiles move into place on the launch pads; a Goodyear “purge and conditioning” system helped the engines circulate nitrogen, oxygen and hydrogen; Goodyear manufactured both the window frame of the command module and the panel on which the landing instruments were mounted.

When Apollo 11 splashed down into the ocean upon its return to Earth, Goodyear-made flotation bags kept the capsule upright. Later Apollo astronauts used a cart to carry photo equipment, digging tools and 35 bags they filled with lunar rock. The cart’s 16-inch tyres were the result of a development project involving hundreds of Goodyear associates.

This year, Goodyear’s in-space evaluation is being conducted through an agreement with the ISS U.S. National Laboratory, which works in cooperative agreement with NASA. Astronauts aboard the ISS will conduct the Goodyear-prepared silica experiment while Goodyear scientists will simultaneously carry out the same experiment in the company’s labs. This allows for a comparison when the space research results – frozen for the journey back to Earth – are studied later.