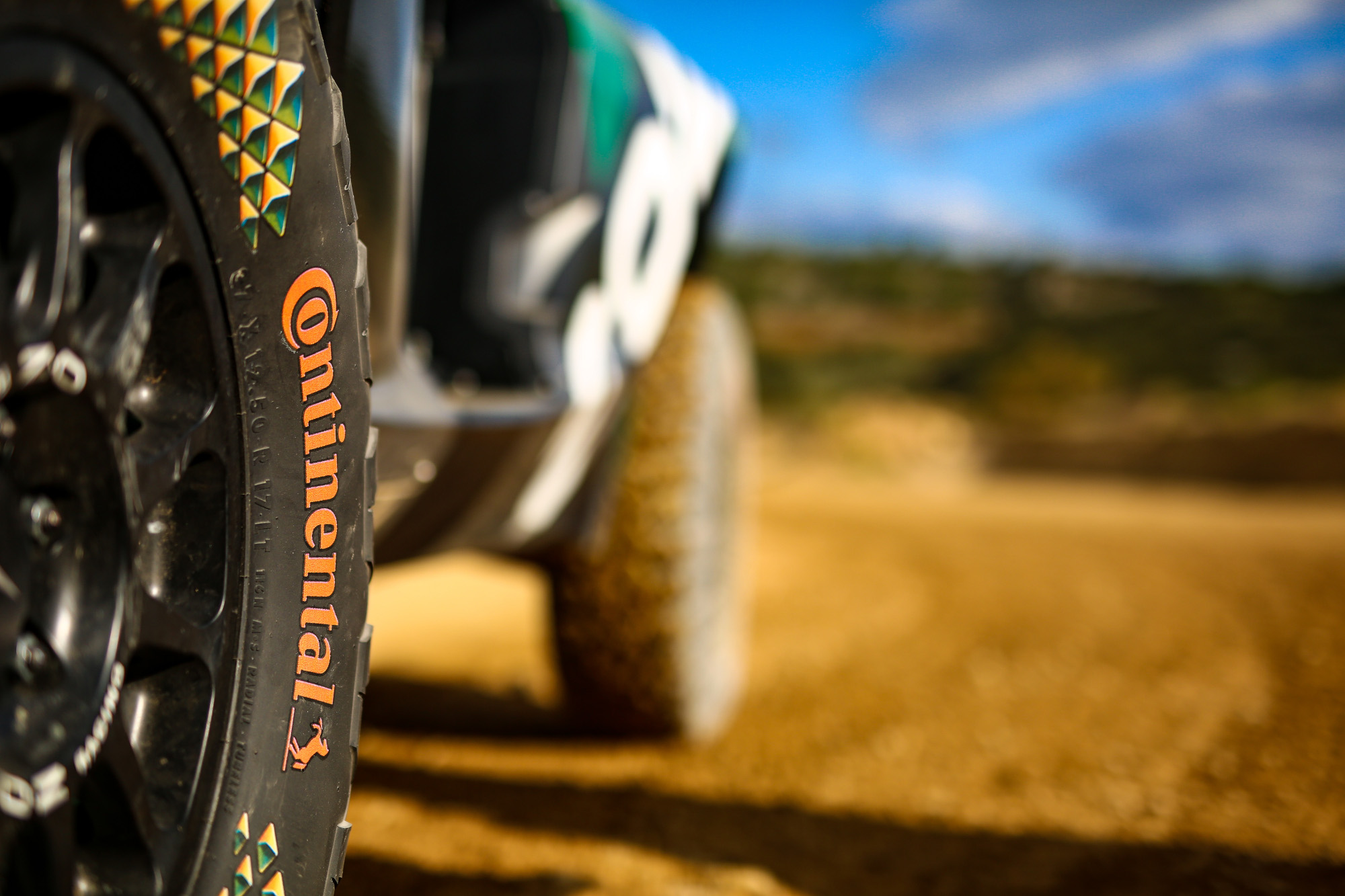 Extreme E is the biggest tyre challenge in motorsport

Put electric-powered 4x4s in some of the toughest off-road racing environments in the world and what do you get? Extreme E. German tyremaker Continental is a founding partner of the series. From 2021 Conti will be premium sponsor. And this means Conti will fit all the competing ODYSSEY 21 vehicles with tyres. Indeed, according to the tyre manufacturer, Extreme E is the biggest challenge tyres have faced in motorsport. With this in mind, Nico Meier, product designer at Continental, talks about the challenges tyres face in Extreme E and the importance of the 4×4 tyre sidewalls in general.

WhatTyre.com: What role does the sidewall play from a technical point of view?

Nico Meier: The sidewall plays a key role in the overall construction of a tyre in the truest sense of the word. Modern mid-size class vehicles now regularly have a permissible gross vehicle weight of 1,500 to almost 2,000 kilograms. The increasingly popular SUVs can be as much as three metric tons. That’s roughly the same weight as a full-grown hippo.

WT: But not all the vehicle weight rests on the sidewall of the tyre, does it?

NM: No. In fact, the sidewall is actually the weakest component compared to the tread that connects the vehicle to the road surface – or the bead that holds tyres on the rim. In fact, it is for this reason we recommend you should never direct a pressure washer onto the sidewall at close range. It could cause damage. Fundamentally it is the internal inflation pressure that determines the carrying capacity of a tyre. A basic formula that can be used is “internal pressure x contact area”. In the case of tyres, different tyre constructions e.g. standard vs. XL adds an additional capacity of 10 to 15 per cent.

WT: So generally speaking, it would be better if the sidewall was designed to be more stable?

NM: A stable sidewall has advantages – and not just when it comes to pressure washers. In the case of tyres, however, everything is always connected to everything else, so the sidewall also plays a key role in the overall design. Together with the belt, it has a significant effect on the handling properties of a vehicle, among other things. A relatively stiff structure reduces the deformation of the tyre during power transmission – i.e. during acceleration, braking and cornering. This improves the handling characteristics and increases the possible cornering speeds. However, a tyre that is too stiff can no longer deflect, and thus has a negative effect on comfort, for example.

WT: What are the legislative requirements?

NM: These are primarily technical details such as tyre width, height-to-width ratio, rim diameter, load index, approved speeds. But also information on the intended use. For example, is this a summer, winter or all-season tyre? The production date is also included, the country of manufacture, and approval numbers. In the case of directional tyres, there is also an indication of how the tyre is to be fitted. To clearly separate the information required by legislator from the rest, the sidewall is divided into two zones: the inner and outer ring. The legally regulated elements are found in the inner ring. That’s the one closest to the rim. In terms of design, we have virtually no influence on this.

WT: You also designed the tyres that are supplied exclusively by Continental to the teams in the new Extreme E racing series. What distinguishes this tyre from conventional tyres?

NM: The tyre is exposed to much larger loads during the races than any other tyre. This is due firstly to the vehicles used. The specially-developed ODYSSEY 21, which is driven by all of the teams, is an extraordinary vehicle which is roughly similar to commercial SUVs in length, width and weight, but with its electrical equivalent of 550 HP has three times the torque of the Formula E Gen 2 vehicle. Secondly, the races do not take place on standardised racetracks with comparable road surfaces, but in a natural environment with varying and very different surfaces: sand, scree, mud, ice, to name but a few. Added to this is the general race situation with extreme accelerations, sharp braking manoeuvres, high speeds, even on tight corners, drift movements, and even jumps. We are dealing with the biggest challenge that tyres in motorsport must face. With the help of ContiPressureCheck technology, tyre data such as the air pressure and temperature should therefore be displayed on a screen in the cockpit during the race for the drivers, so they can adapt their driving style in extreme situations.

The challenges on the tyres are very different from race to race, because the venues are so different. Sometimes it’s through the desert, another time through the rainforest or even the Arctic.

WT: Are there bespoke tyres for each race?

NM: No. Using the tried-and-tested Continental CrossContact, we have developed a tyre that should work at all event locations and in all conditions. So, there’s no special desert tyre, or a special polar tyre. Nor is it the intention to fit new tyres for every start. This would not be in line with the sustainability requirements of the racing series. 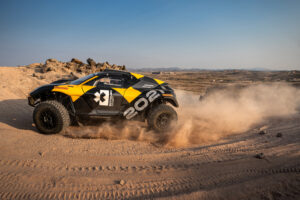 The striking colours of Conti’s Extreme E tyres aside, sidewall design is extremely important both on the racetrack and the road (Photo: Continental)

WT: The Extreme E tyres have quite colourful sidewalls…

NM: The design of the tyre is divided into four zones. One zone contains the Continental logo, another the product name CrossContact – both in Conti yellow. In between are zones with multi-coloured structures. This colourfulness is a striking contrast to conventional tyres. We decided on this for two reasons. Firstly, unlike products in the retail sector, these tyres will rarely be seen at close proximity. Thanks to the coloured highlighting, we achieve improved visibility at greater distances and on digital media. And secondly, with the colour of the design elements, we want to reflect the extreme and breath-taking natural landscapes in which the races are held. Green is the colour of the rainforest, yellow stands for desert sand and sandstone mountains, blue for the ocean, and white for the Arctic. In addition, we have created a 3D effect that gives the elements the appearance of a protective layer – similar to a dragon’s skin or a lizard’s scale armour. In doing so, we highlight the extremely robust and resilient character of the tyre. During the races, the rotation creates a fascinating flow effect.

WT: Could the colouring process also be used for conventional series products?

NM: Yes. That could be done without making any changes. We can imagine it being used in particular in “special interest” tyres, such as all-terrain tyres or racing tyres with road registration. Standard tyres will certainly also shine in plain black in the future.

Use pressure washers on tyres with care

Take care when using a self-service car wash. Weather and road conditions during winter lend a patina of filth to many cars during the winter months, but tyre maker Continental warns that DIY car washes can be punishing to tyres.
Read Article

Looking for SUV tyres? First you'll near to find your tyre size. In case you were wondering, here’s the latest on the most popular tyres in the SUV and 4x4 tyre segment. The short story is that the top spots now all filled with either 17 or 18-inch sizes. This change has come at the expense of the 16 and 19-inch sizes managed to make it into the top five last year.
Read Article

Auto Bild Allrad tests SUV tyres – not all are recommended

Think there’s no such thing as a bad tyre these days – think again. Auto Bild Allrad evaluated ten SUV tyres but can only recommend eight – and it’d prefer us to avoid one altogether. The upshot is that it still pays to do your homework when buying replacement tyres.
Read Article

SUVs now account for 37 per cent of all car sales. The Nissan Qashqai is the UK’s most popular model. Most people are familiar with what Range Rover and VW have to offer in this space, but more recently SUVs made by Seat and Dacia have increased in popularity as well. With SUVs as popular as ever, SUV tyre sales have been on the up-and-up too. So the question for many motorists is: what tyres should I buy for my SUV?
Read Article