Drives like a conventional tyre: Thumbs-up for Michelin Uptis 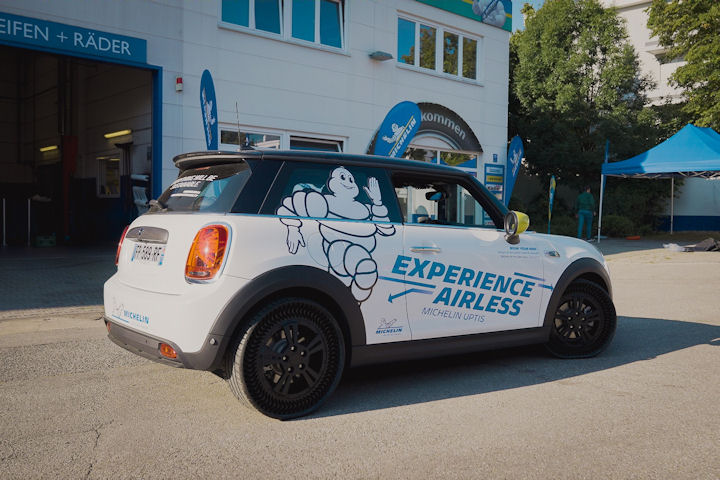 Everyone who tested Uptis at this month’s IAA Mobility 2021 “unanimously approved” the prototype airless tyres, says Michelin. This is a lofty claim and hard to verify, but Michelin does provide some evidence in a short video featuring automotive influencer Mr JWW and enigmatic car enthusiast Gercollector.

After driving the Uptis-shod Mini on the streets of Munich, Mr JWW commented that the biggest compliment he can give Uptis is “that if you didn’t know, you wouldn’t know.” The UK-based car enthusiast also known as James William Walker elaborated: “When you see it from the outside, the structure of the tyre, you think there’s no way this thing is going to drive the same as a conventional tyre, and lo and behold…it actually does.” Gercollector said Uptis is “really impressive” and confirms that the tyre’s “comfort was amazing” and made the steering feel direct.

The structure of Uptis, which is capable of supporting the vehicle, eliminates the need for air while delivering a safe, comfortable ride. Michelin says it “remains on course” to bring the first Uptis tyre to market in 2024. By doing so, it will play a part in reducing 200 million tyres currently unnecessarily scrapped each year as a result of rapid pressure loss or irregular wear caused by under- or over-inflation.