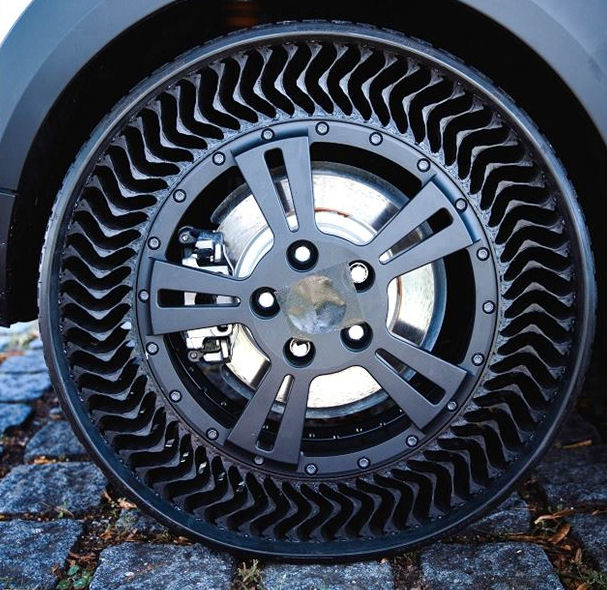 A new wheel technology promises to put an end to punctures, spare tyres and that dreadful can of repair foam lurking in the bowels of your car’s boot. Those with a relaxed approach to tyre maintenance can also look forward to being unshackled from regular tyre pressure checks, or from pangs of guilt when neglecting said safety regimen. The technology goes by the name of Michelin Uptis Prototype, and Michelin stresses that Uptis is more than merely a concept.

The tyre maker says cars may use the solution within the coming five years. Michelin is working towards this goal with General Motors in the USA. The two companies are currently testing Uptis at proving grounds. On-road fleet tests start later this year. If all goes to plan, Uptis will arrive as an option for select GM models as early as 2024.

For the past decade, Michelin has offered its airless Tweel solution to users of certain agricultural, garden and industrial machines. This product forms the basis for Uptis, but the two products differ in a number of ways. Importantly, Michelin has re-engineered the Uptis Prototype for motorway speeds. It is tuned for passenger vehicles and can replicate the performance of a traditional tyre.

Removing the risk of punctures is a highly attractive benefit. An equally or even more important consideration for motorists is how Uptis performs. Michelin thinks it unlikely that drivers will notice a difference between Uptis and a standard tyre. It says “Uptis improves the vehicle’s performance without compromising comfort in any way.” Uptis performances are, it adds, comparable to a run-flat or zero-pressure tyre.

A standard pneumatic tyre and wheel typically weighs nearly 21 kg, while a mounted run-flat can weigh up to 23 kg. The Uptis Prototype assembly’s current design weighs about 22.5 kg. Uptis can also yield overall vehicle weight reductions by removing the need for a spare tyre, jack or tyre pressure monitoring systems that exist in many vehicles today.

We often hear that car sharing will take the place of car ownership in future. Drivers of shared cars and occupants of self-driving shuttles won’t maintain these vehicles or their tyres, obviously, and therefore Uptis is a good fit for this mobility model. Michelin says that fleet applications, especially autonomous passenger fleets or urban fleets transporting large volumes of passengers, are the most obvious target market segments for Uptis. But it also foresees a much broader range of possibilities for the technology.