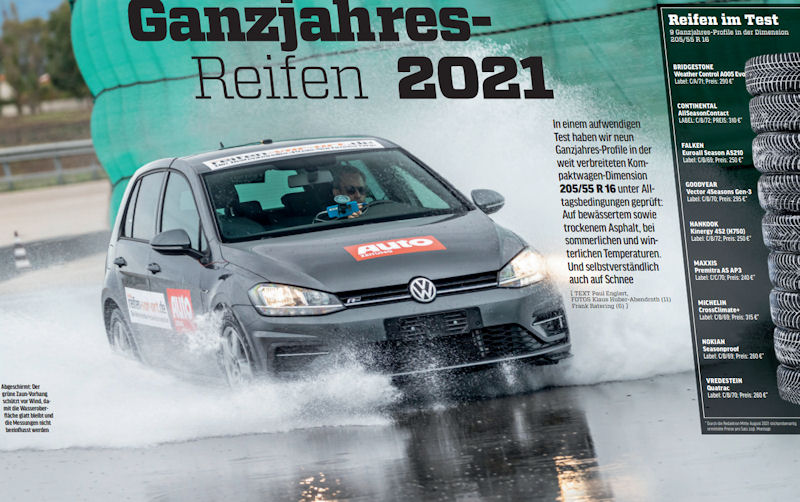 Parky mornings and evenings are one sign that summer is on the wane. The appearance of all-season and winter tyre tests is another. The first out this year is from German motoring magazine Autozeitung, which looked at the commonly-fitted small car size 205/55 R16. Autozeitung evaluated nine brands of all-season tyre on a VW Golf Mk7 for their performance in wet, dry and snowy conditions, as well as comfort, noise and rolling resistance.

The results were in line with some of the results we’ve seen in the past and showed a tendency for all-season tyres to perform particularly well in specific conditions but not so strong in others. Autozeitung thus recommends tyre buyers research various products before selecting one that matches their own individual requirements.

Two tyres shared victory in the current test, and the testers highly recommended a further three.

The Autozeitung testers report that this allrounder “fully convinced on snowy, wet and dry roads.” The AllSeasonContact’s greatest strength was in the snow disciplines, where the testers said the Continental tyre’s “traction and deceleration performance are excellent.” They also noted spontaneous steering response and high overall safety reserves.

Top-notch results in wet and dry testing propelled the Vredestein Quatrac into joint first place. The testers experienced high safety reserves in wet conditions as well as balanced handling, short braking distances and low rolling resistance in the dry. They also judged the Quatrac safe on snow, and thanks to the Vredestein tyre’s good value for money they gave it a particular price-performance recommendation.

The testers lauded the Goodyear tyre for its strong performance on wet and dry surfaces as well as safety on snow-covered roads. Autozeitung also shares that the Vector 4Seasons Gen-3 has particularly efficient rolling resistance, and thus gave the tyre its economy recommendation.

A new generation CrossClimate is being launched this week, but the existing product continues to enthuse. Autozeitung refers to the tyre’s performance in wet and dry testing as “consistently good” and states that the Michelin is also reliable on snowy surfaces.

“Whether cold or warm, the Bridgestone Weather Control A005 EVO is strong in the wet and dry,” reports Autozeitung. The testers cautioned, however, that the tyre is only “sufficiently grippy” on snowy roads.

Autozeitung found the Hankook tyre to be “very safe” on snowy and dry roads in warmer temperatures, as well as in the wet. The testers were less convinced about its wet weather performance when the mercury sinks, however.

Autozeitung deemed the Euroall Season AS210 good on snow and – at warmer temperatures – strong in wet conditions. But when the temperature sinks, the Falken tyre offers reduced grip on both wet and dry roads.

Although displaying a good resistance to aquaplaning and short braking distances in the dry, Autozeitung reports that the Maxxis tyre offers too little grip overall. Rolling resistance was less than optimal as well.

Summing up, Autozeitung writes that its test shows that “when developing all-season tyres, manufacturers follow very different approaches.” It elaborates that some tyres are snow specialists while others offer top performance in wet or dry conditions, or are all-rounders. “However, our test also shows that temperature can have a major influence on the grip of individual tyres. That is why you should inform yourself thoroughly before buying and compare the offers carefully. In the end, this saves a lot of time, money and nerves.” 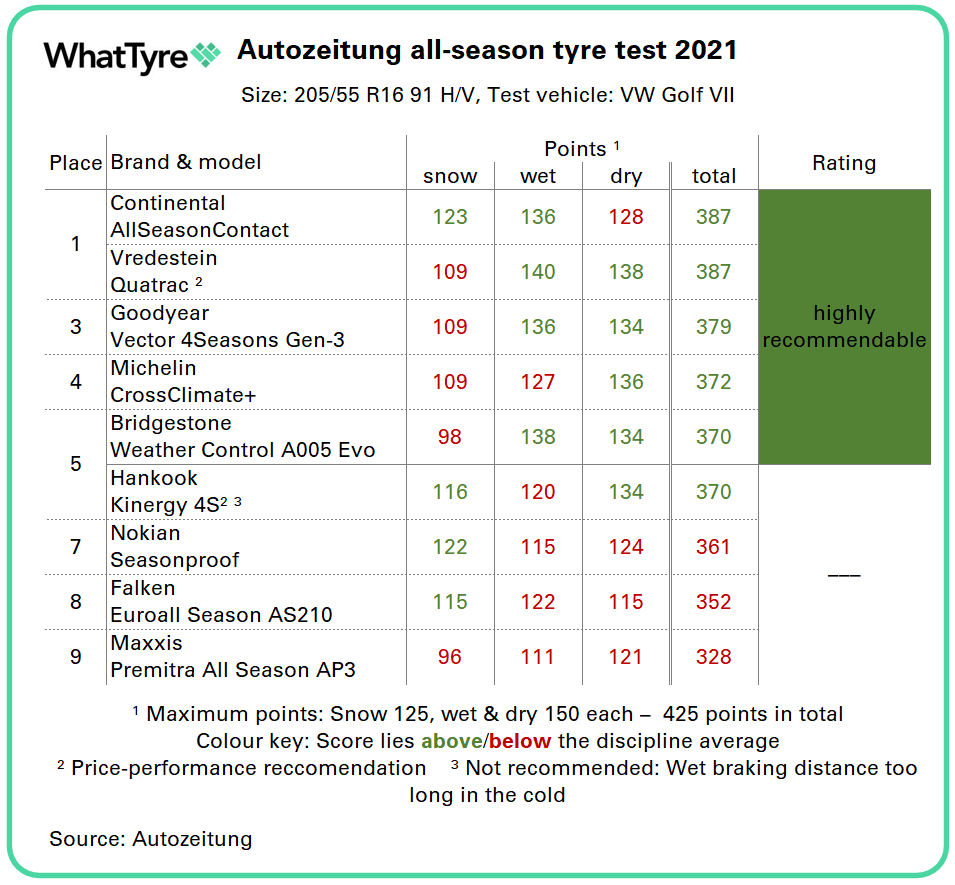