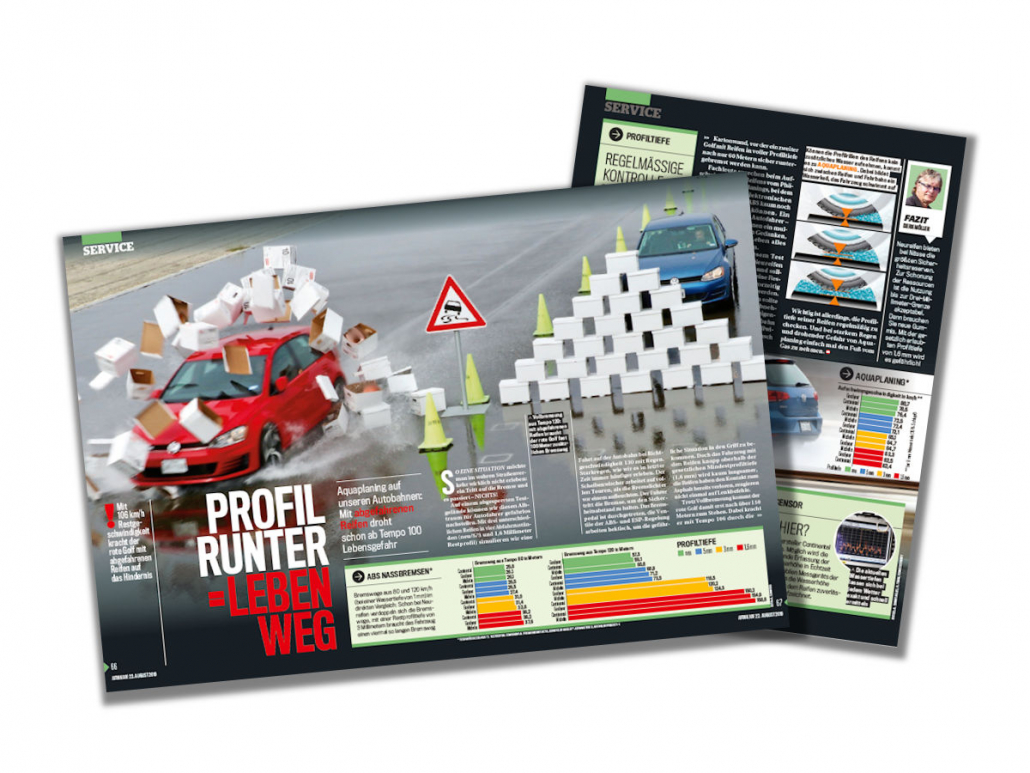 As we shared in July, progress is being made towards a wet grip test for worn tyres. Michelin actively supports this. Through its Long Lasting Performance (LLP) strategy, it claims that driving on tyres to the legal tread depth of 1.6mm can be safe. But as a new tyre test shows, the subject is one where opinions vary.

The test is by Germany’s most-read retail car magazine, Auto Bild. In the issue appearing 22 August, Auto Bild looks at three premium tyre brands and their respective braking distances/aquaplaning speeds. The tyres were tested in new condition as well as with 5mm, 3mm and 1.6mm of tread remaining.

Auto Bild doesn’t pull any punches, beginning with a dramatic headline that can be read in two different ways. ‘Tread Low = Life Gone’ (Profil Runter = Leben Weg). The tone continues throughout, with the motoring magazine’s resident tyre tester asserting that worn tyres pose a risk of “mortal danger” even when driving at 100km/h,

Auto Bild concludes: “New tyres offer the largest safety margin in the wet. Usage down to a 3mm limit is acceptable in order to conserve resources. Then you need new rubber. Danger arises with the legally allowed tread depth of 1.6mm”.

Michelin was quick to point out a couple of issues with the Auto Bild test. Pierre Robert, the tyre maker’s vice president of research, even called it “one-sided” and “unrepresentative”. He thinks the testing reflects an “unrealistic driving situation”.

Robert believes the Auto Bild test one-sided as it only involves premium tyre brands. For this reason, the test didn’t show the “particularly large differences” between premium and other tyre manufacturers seen in prior Auto Bild tests. “As only premium tyres were compared, the analysis of the worn tyres’ performance is one-sided”.

Auto Bild tested wet braking distances on a road surface covered with 1mm of water. The magazine itself points out that water on main roads and motorways only exceeds this depth “in rare cases”, even during heavy rainfall. Pierre Robert agrees that actually encountering 1mm of water on the road is a “rare, exceptional situation”, as more than 100 litres of rain per hour would first need to fall. Therefore, he believes Auto Bild’s scenario – 120km/h in poor visibility and uncertain road conditions – isn’t a “realistic everyday situation”. Accident research used as a reference for LLP supports his opinion.

As for the aquaplaning test, Auto Bild reports that it tested with a water depth of 9mm. This is – by anyone’s measure – a lot of water.

Another thing the Auto Bild test showed is that the Goodyear and Continental tyres demonstrated the LLP strategy a tad better than Michelin itself. At a tread depth of 1.6mm, both had slightly shorter stopping distances from 80km/h and 120km/h. Pierre Robert views this as a positive result: “The article supports our LLP argument that tyre performance at decreasing tread depths is a decision made by manufacturers. We are pleased that other premium manufacturers are also considering the findings of Long Lasting Performance during the (tyre) development process.”

Robert reiterates that he considers Auto Bild’s described driving situation unrealistic. “Driving can be safe, even in the rain, with good tyres and an appropriate driving style,” he states. “My impression is that this article hasn’t made this clear enough.”