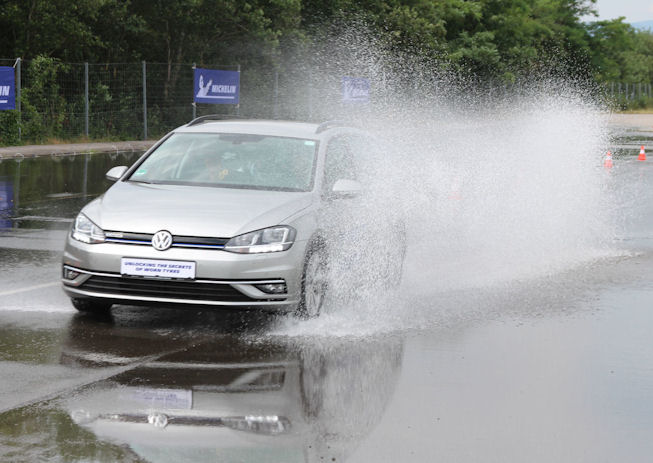 Michelin: Why we need to test tyres when they’re worn

The problem with the wet grip rating found on every tyre label is that it measures wet grip when the tyre is new – and tyres don’t remain new for very long. This will change in the next few years with the introduction of wet grip testing on worn tyres. WhatTyre recently spoke with Michelin, a passionate supporter of such testing, about what we should expect.

Fabienne Goyeneche works for Michelin in Paris as EU affairs manager. She reports that a ‘working group’ has been formed to develop a regulation for testing wet grip on worn tyres. The group has been set up by the United Nations Economic Commission for Europe (UNECE) and currently consists of more than two dozen representatives from tyre manufacturers and importers, car makers and other organisations.

The working group met for the first time on 2 May and discussed the fundamentals of what it wants to achieve. It seems likely it will use the tyre label’s wet grip test as the basis of a test for tyres with a 1.6mm tread depth. Goyeneche says we’ll probably see such a test adopted in Europe and the UK in the next three to four years.

Although worn tyres abound at garages, fast fits and scrapyards, these aren’t suitable for testing. Instead, new tyres whose tread has been buffed down to 1.6mm will be used. This raises a question – do buffed new tyres behave like tyres that have worn during years on the road? The short answer is yes.

Michelin is one of a number of tyre makers researching the testing of worn tyres. Pierre Robert, vice president of research at Michelin, tells us there is “general agreement” that a decrease in tread depth or a diminishing void ratio (more rubber on the road and less water-draining gaps between the tread blocks) is the main factor behind reductions in wet grip performance. The ageing of materials “only plays a very minor role.”

How can you tell if a tyre will grip in the wet when worn?

Testing is obviously the most effective means of determining changes to wet grip over a tyre’s lifetime. But Pierre Robert says there are several things to look out for.

Sipes, the traction-improving rubber slits on a tyre tread, must be flexible. Pierre Robert considers teardrop-shaped sipes the most effective over a tyre’s lifetime.

Other characteristics can be spotted by a more expert eye. The shape of a tyre’s contact patch – the part of the tyre that comes in contact with the road – should be rounded or shaped like the bow of a boat. Robert says this “is best as it pushes water forwards and to the side.” Rectangular and square contact patches are better for tyre wear but don’t offer great wet grip. The rubber tread compound also contributes to wet grip performance over a tyre’s life.

Why is it important to test worn tyres?

It isn’t necessary to test a worn tyre’s dry grip. The optimal tyre for dry grip is a slick like those used in F1, and the more a tyre wears the more closely it resembles a slick. Rolling resistance and noise performance are also characteristics that are at their very worst in a new tyre and improve over time.

Wet grip is different. The grip and stopping distance your tyres provide in the wet will never again be as good as on the day they were fitted to your car. And next month they’ll be a little worse than now.

To complicate matters, no rule exists for measuring this drop in wet grip performance. “Tread depth is not a reliable indicator of braking performance on wet roads,” comments Fabienne Goyeneche. “Nor is a tyre’s braking capacity when new a good indicator of how it will perform when worn. There is no obvious correlation for either.”

Michelin carried out some testing of its own back in 2016. Testing covered 13 tyre models, both Michelin and competitor tyres. Michelin replicated the wet grip test used for the tyre label – decelerating from 80km/h to 20km/h on a normal road surface covered with 1mm of water. It tested the tyres when new as well as with 3mm and 1.6mm of tread. The tyre maker found no correlation between stopping distance for the new tyres and the worn tyres. Existing label results for wet grip were no indicator of wet grip at 3mm or 1.6mm.

Why should I care about worn wet grip testing?

Well, obviously because when it rains you want your car to stop before it hits something. But safety is only one consideration. Worn grip testing may also save you money by providing peace of mind to take your tyres down to the legal tread depth limit of 1.6mm rather than replacing them with 3mm of tread. Michelin says European motorists could save up to 7 billion euros a year by doing this, as well as 6.6 million tonnes of CO2.

For tyres that begin life with an 8mm tread depth, this additional usage increases tyre life by more than 25%. For high-performance tyres with a new tread depth of 7mm, the increase in tyre life is around 35%.

When wet grip labelling for worn tyres finally does arrive you can be sure that the best performers won’t be the cheapest tyres. But the savings made by using a tyre longer may more than offset its high purchase price. 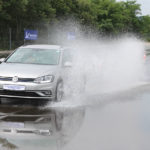 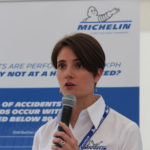 Fabienne Goyeneche: A tyre’s braking capacity when new is not a good indicator of how it will perform when worn 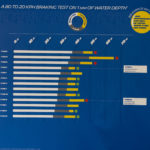 Michelin tested 13 tyre models when new, with 3mm tread & with 1.6mm tread, and found no correlation between new and worn performance 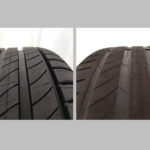 Even with only 1.6mm of tread, this Michelin Primacy 4 retains its four u-shaped grooves & much of its siping 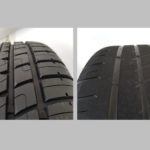 When this mid-range tyre reaches 1.6mm the v-shaped tread grooves provide less water drainage, while its sipes and some grooves disappear entirely