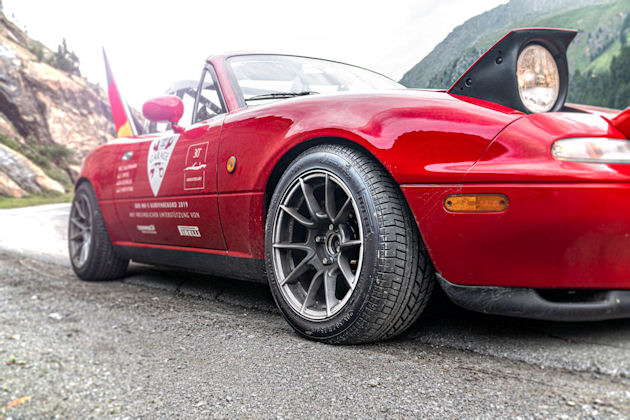 The Mazda MX-5 arrived in the UK nigh on three decades ago, and the love these cars enjoy can be seen in registration figures. More than a quarter of the 25,022 first-gen cars sold here are still on the road. Pirelli loves the MX-5 too, and has been involved in bringing the roaster world record glory on the 30th anniversary of its launch.

Specifically, the world record for the highest number of hairpin turns in 12 hours of driving. Mazda chose mountainous Tyrol in Austria for the attempt.

Mazda’s subsidiary in Germany fitted an original first-gen car with tyres from the Pirelli Collezione range. These are tyres developed for vintage and classic cars that pair period styling with contemporary construction and materials. The MX-5 wore Pirelli P Zero Asimmetrico tyres in size 205/50ZR15 86W.

After 12 hours, the team had negotiated exactly 2,900 hairpin bends on the Kaunertal Gletscherstraße (Glacier Road), almost double the 1,500 required for the record. The panoramic road is 16 miles long and includes 29 hairpin bends as it ascends almost 1,500 metres up to the Kaunertal glacier.

Virtual drive before the record

The P Zero Asimmetrico’s tread pattern is the original P Zero pattern worn by the Ferrari F40 in 1987. Pirelli says the pattern was first used, under a different name, on tyres for rally cars a year earlier.

In order to evaluate the durability of the tyre structure before the world record drive, experts from Pirelli recorded the route profile of the Kaunertal Gletscherstraße on computer and translated it into a digital test programme. After that, the tyres underwent 18 hours of physical testing in an indoor laboratory for maximum lateral acceleration, both in a straight line and through a variety of corners. The wheel load was also repeatedly tested at 150 per cent of its maximum capacity.

The Pirelli Collezione range is distributed in the UK by Longstone Tyres.