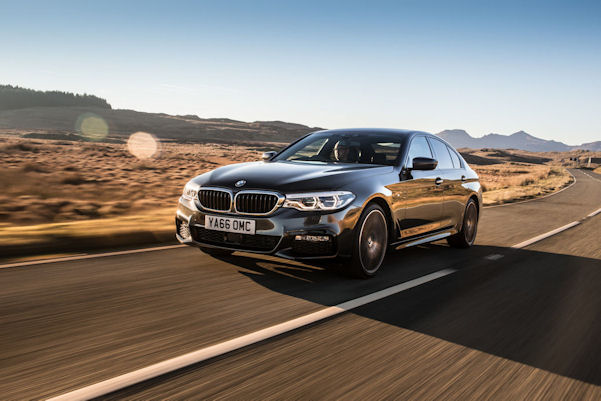 In round one of its 2020 summer tyre test, Auto Bild kicked out more than half the 50 candidates as their braking distances weren’t competitive enough. The German motoring magazine scrutinised the 20 survivors more intensively and has now published the results of this comprehensive second test round.

Seasoned Auto Bild testers Dierk Möller and Henning Klipp fitted the size 245/45 R18 100Y tyres to a BMW 5 Series for evaluation. They looked at the tyres’ performance in wet and dry conditions, as well as cost-related factors. None of the 20 finalists were truly awful, and Auto Bild gave more than a third its top recommendation.

Having rated seven tyres as ‘exemplary’, Möller and Klipp stress that “exemplary tyres needn’t always be expensive.” A set of the cheapest top-rated tyres can be yours for just 435 euros (£376) in Germany, and the testers note that five of the seven exemplary tyres are available “at a fair price.”

The winner is Continental. And Goodyear. Auto Bild awarded both the PremiumContact 6 and Eagle F1 Asymmetric 5 the coveted first place. It additionally named the Continental tyre the test’s ‘Eco Champion’ due to its good mileage potential.

Third place went to the Michelin Pilot Sport 4. The testers found it a very sporty tyre with “precise steering characteristics and exemplary driving dynamics”. The Pilot Sport 4 also delivered the shortest braking distances and good aquaplaning safety. The only noted minus was high purchase price.

The Vredestein Ultrac Vorti gripped and handled very well on dry and wet surfaces. Auto Bild says this fourth-placed tyre also offers precise steering behaviour and aquaplaning safety – all at a fair price. Its sole gripe was rolling resistance, which is on the high side.

Safe driving behaviour and short braking distances both in the wet and dry. Auto Bild also commended the N’Fera Sport’s ride comfort and noise levels, but said its rolling resistance was too high.

The Nokian Powerproof finished the test in eighth place. It delivered “convincingly good handling qualities and short braking distances on wet and dry road surfaces” as well as precise steering behaviour. Mileage potential was only average.

Auto Bild considers the Firestone Roadhawk an affordable brand-name tyre with balanced driving behaviour in the wet and dry and good aquaplaning safety. Mileage potential was only average. It is interesting to note that this tyre from Bridgestone’s brand finished the test ahead of its premium sibling.

The Fulda Sport Control 2 shares ninth place with the Firestone tyre. The testers talk of “stable driving characteristics” in the wet as well. Other positive characteristics were short braking distances in the dry, good comfort levels and the lowest rolling resistance of the 20 tyres. On the downside, Auto Bild thought the Fulda’s mileage potential poor and it a little pricey. Fulda is, incidentally, a German tyre brand that today belongs to Goodyear.

The Bridgestone Potenza S001 is, says Auto Bild, a “wet specialist”, very well-balanced with safe handling characteristics, good aquaplaning safety reserves and short braking distances. But it had to settle for 11th place due to poor mileage potential and high rolling resistance.

Auto Bild commended the Hankook Ventus S1 Evo³ for its convincing driving performance and short driving distances on wet and dry surfaces – at a “fair” price. The testers marked the tyre down for its “limited” mileage potential.

Finishing the test far behind its Goodyear sibling, the Dunlop SportMaxx RT2 offered “good reserves of safety when aquaplaning, short dry braking distances and low rolling resistance.” But a couple of issues were noticed in wet conditions, namely understeer and extended braking distances.

The “affordable” Kleber Dynaxer UHP delivered short dry braking distances. Its mileage potential is high and rolling resistance low. On the other hand, Möller and Klipp weren’t impressed by the Kleber’s grip and lateral control on both wet and dry surfaces. The Kleber brand has been Michelin-owned for the past 40 years.

With a name like RainSport 3 you’d expect strong performance in the wet. But this Uniroyal tyre failed to deliver here. Auto Bild drew attention to its understeer and delayed steering response on wet roads. Positive characteristics include good mileage potential and low rolling resistance. We think 16th place a poor finish for a tyre made by the same company that produced the PremiumContact 6.

Auto Bild gave the Toyo Proxes Sport the thumbs-up for its short braking distances in the wet and dry as well as its good reserves of safety when aquaplaning. Sounds all well and good, but the testers also reported understeer in the wet, stodgy steering behaviour and limited mileage potential.

This budget tyre from China was a “surprise” survivor of the elimination round. It may have finished last in the final test, but this result should be viewed in context – all in all, it beat 30 other contestants. Auto Bild’s testers commended the Zeetex tyre’s short braking distances in the wet and dry and its low rolling resistance. It also offers a very affordable purchase price. But Möller and Klipp also experienced understeer in both wet and dry conditions as well as low reserves of safety when aquaplaning. Mileage potential is also limited. 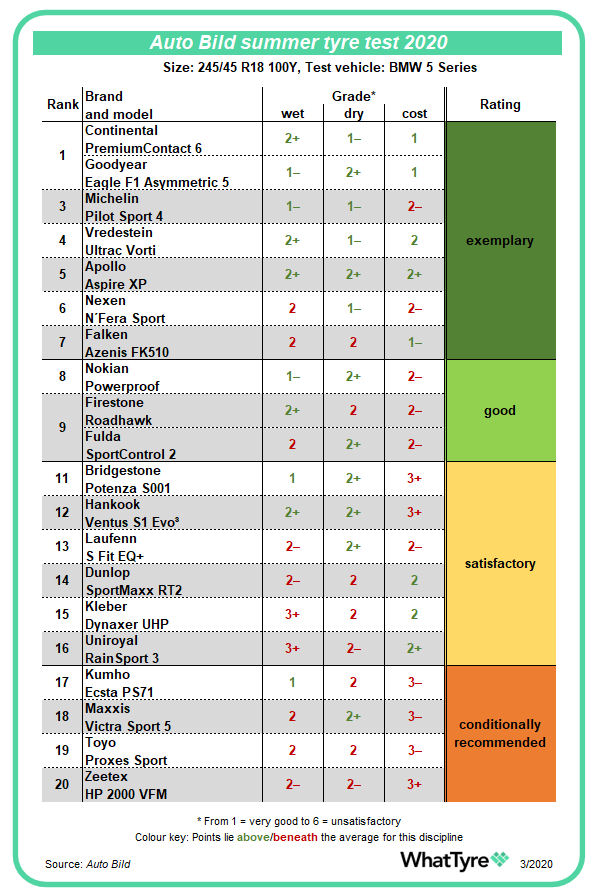