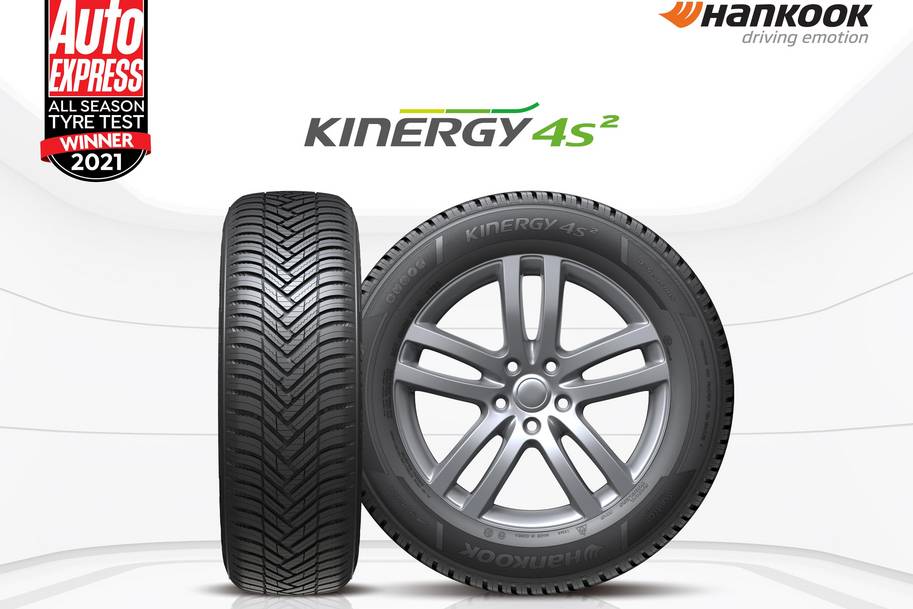 Déjà vu aplenty in the 2021 Auto Express all-season tyre test. This year the publication returned to the 205/55R16 size it last looked at two years back, and the Hankook Kinergy 4S2 that participated in the 2019 test was back as a contender in 2021. Same tester, same tyre, same size. But this is where the similarities end; whereas the Hankook tyre finished seventh in 2019, this year it won.

“As we’ve seen with other tyres in the Korean producer’s range, Hankook is not afraid to develop a tyre during its life,” comments Auto Express tyre tester Kim Adams. He considered the 2018-launched Kinergy 4S2 a relatively poor performer on snow-covered roads during its initial Auto Express evaluation, but when Auto Express revisited all-season products last year (in a 17-inch size) he found the tyre improved in this area. This time round, Adams voted the Hankook tyre runner-up during testing in wintry conditions.

As the Kinergy 4S2 showed “little compromise elsewhere” – it gave the best wet weather performance in the eight-tyre test and finished a close fourth in the dry – Hankook has now gained its second Auto Express all-season win, following on from its victory in summer.

“Just like buses, Hankook has waited more than a decade for a test win, then two come along in the same year,” says Adams. “Impressively, they have come from tyres it has developed into winners. A worthy champion.”

Sanghoon Lee, president of Hankook Tire Europe, declared the result “another great test win” for Hankook. “We are delighted with the result in the latest all-season tyre tests by Auto Express. Our company has been offering its customers innovative high-performance, all-season tyres for over 20 years, making us one of the main pioneers in this product category. These awards clearly demonstrate our commitment to providing drivers with the ultimate in safety and reliability in wet, dry and snowy conditions.”

Hankook may have snatched victory from the Bridgestone Weather Control A005 Evo, but Auto Express states that these two top tyres “couldn’t be closer,” and indeed there was “very little” between the four highest-ranked tyres.

Auto Express calculated its results by weighing up scores in a way that reflects typical UK weather. Wet testing thus accounts for half of the overall result, with snow and dry testing making up ten and 35 per cent respectively. The rest is split between fuel economy and cabin noise, with price only a minor factor. The results were converted to percentages, with each tyre’s result ranked relative to the best performer.