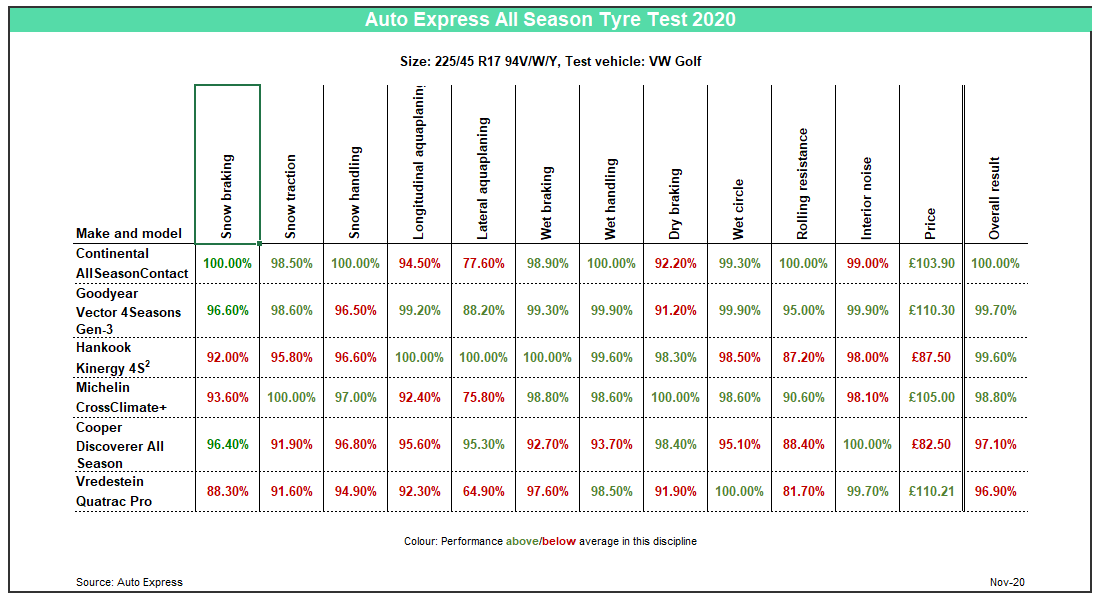 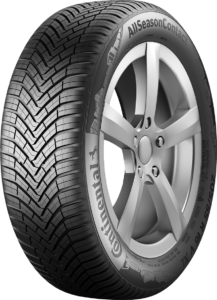 Continental’s AllSeasonContact (pictured) won four of the 12 categories and was above average in eight (Photo: Continental)

At the end of November Auto Express published its latest test comparing the performance of leading year-round tyres. Continental’s AllSeasonContact won but Goodyear’s Vector 4Seasons Gen-3 and Hankook Kinergy 4S2 were hot on its heels in second and third place respectively.

Back to the results, while Continental’s AllSeasonContact won four of the 12 categories and was above average in eight, it is difficult to describe the tyre as clear winner because the Goodyear’s Vector 4Seasons Gen-3 and the Hankook Kinergy 4S2 were just 0.3 per cent and 0.4 per cent behind overall. Indeed, Goodyear’s tyre came within 1 per cent of winning three categories and Hankook actually beat Continentals tyre in longitudinal aquaplaning, wet braking and wet handling.

Kim Adams, Auto Express Products Editor summed up the results like this: “Continental has created a strong performer in the AllSeasonContact, with good results in the wet, even better scores in the snow and low rolling resistance helping your fuel bills. It’s another well-deserved victory for the German brand’s great all-rounder.”

Introducing its 2020 test, Auto Bild Allrad comments that all-season tyres weren’t always highly regarded. Their reputation was one of compromise, of products best suited to drivers who demanded little from their tyres. In the words of the specialist 4x4 and SUV magazine, an all-season tyre “used to be a bad summer tyre and then, in the second half of the year, a bad winter tyre.” But its latest test shows that the story is a very different one these days.
Read Article

When it comes to tyre testing, the Germans are in a class of their own. During the last few months, the country’s magazines and motoring clubs (together with their Austrian & Swiss counterparts) have put a total of 197 winter and all-season tyres through their paces. As many of the tested products are available here in Blighty, UK drivers also benefit from this methodical approach to finding the right tyre.
Read Article