Why did Pirelli’s F1 tyres fail at the British Grand Prix? 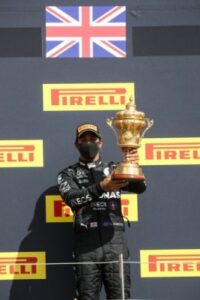 Pirelli is investigating the reasons for the tyre failures at this weekend’s British Grand Prix. Lewis Hamilton limped his Mercedes to the chequered flag at Silverstone on 2 August race after his front-left P Zero White deflated on the last lap. His team-mate Valtteri Bottas and McLaren’s Carlos Sainz both had tyres fail in the final stages too. Mario Isola, who is Pirelli’s head of F1 tyres, explained that the likely causes of their failure were that they wer “extremely well-used”, while Hamilton also spoke of the presence of debris on the track from two accidents early in the race.

The smashes also account for the long stints teams put the P Zero White through. Most cars changed to the hard specification tyre early as a result of a safety car period. The tyre failures injected some late tension into what had been a very sedate grand prix – in the end Hamilton described his seventh win at the British Grand Prix as his “most dramatic”.

Pirelli, which supplied the P Zero and Cinturato Formula 1 tyre ranges is conducting a full examination on what led to the tyres’ failure. Red Bull’s Max Verstappen, who finished second, switched to his used P Zero Red tyres for the final two laps as he set a new fastest lap. The change both allowed him to tour the circuit in quicker times than rivals completing the race on the hard P Zero White tyre, and may have cost him a race victory. However there was no way for him to know that Hamilton’s tyre would fail prior to committing to the change. And given that he was running on the P Zero White for nearly 40 laps, just like Hamilton and Bottas, he may have experienced similar tyre problems too.

Ahead of Pirelli’s investigation, Mario Isola added: “What we already know for sure is that the tyres involved in these failures were extremely well-used, with nearly 40 laps of running; albeit some behind the safety car. The race was very much influenced by the safety car, with the second one prompting a pit stop for nearly everyone, leading to a very long second stint. After a complete analysis we will be able to understand fully what happened, which will obviously be very valuable information for next weekend.” 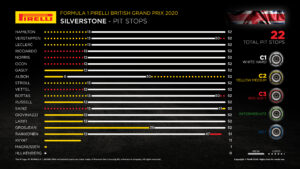 Pirelli will supply Formula 1 with a different tyre specification for the second race in the 2020 Formula 1 season’s Silverstone double-header. The British Grand Prix sponsored by Pirelli ran on the C1 compound as P Zero White hard, C2 as P Zero Yellow medium, and C3 as P Zero Red soft. The 70th Anniversary Grand Prix next week will be one-step softer: so C2 as the hard, C3 as the medium and C4 as the soft. This creates Formula 1 history: the first time ever that there has been two different tyre nominations for a double-header at the same venue.

So why make this change? The exclusive tyre supplier says the change will keep the teams on their toes, and potentially increase spectator interest. Pirelli said the choice has been made to add an element of unpredictability from one race to the next, with teams having to re-think their strategies for the second Silverstone weekend. In the first half-hour of free practice 2 at the 70th Anniversary Grand Prix, all teams will also test next year’s 13-inch prototype slick tyres for Pirelli.

Prior to the British Grand Prix, Mario Isola said: “With two races at the same venue, on a track that the teams know well, it was important to try and inject an additional element for the second race, which is why we are going one step softer for the 70th Anniversary Grand Prix… For the second race, depending on each driver’s strategy, we could see mainly two stops. Gaining data on the C4, which will face an extremely big challenge at Silverstone, will be the key to the second race, while the teams will obviously already have plenty of information about the C2 and C3.

“Silverstone is characterised by big lateral loads that put plenty of energy through the tyres, so avoiding overheating and managing degradation will be especially important.” The importance of this is likely to be at the forefront of teams’ minds, given the failures witnessed at Silverstone this weekend, even though the C1 coumpound used on the P Zero White tyres at the British Grand Prix had already been ruled out for the second part of the double-header.

The 70th Anniversary Grand Prix marks 70 years since the inauguration of the first F1 World Championship at Silverstone in May 1950. The race – and first F1 title – was won by Alfa Romeo’s Giuseppe Farina on Pirelli tyres. After the British and Austrian Grands Prix, Pirelli will add one more race to its support package at Mugello in Italy.

As well as Formula 1, Formula 2 is racing in Britain on Pirelli’s new 18-inch tyres: which have helped to deliver six stunning races so far. Formula 3 additionally resumes at Silverstone, providing plenty of action. Both championships also have different tyre nominations for each weekend of racing.

Pirelli’s motorsport campaign across the board is resuming as Covid-related restrictions ease in Europe: Pirelli driver Alexey Lukyanuk won the Rally di Roma last weekend (part of the European Rally Championship) while the Belgian Audi Club Team WRT won the first round of the GT World Challenge at Imola. Pirelli has also been testing its 2021 WRC tyres in Sardinia.