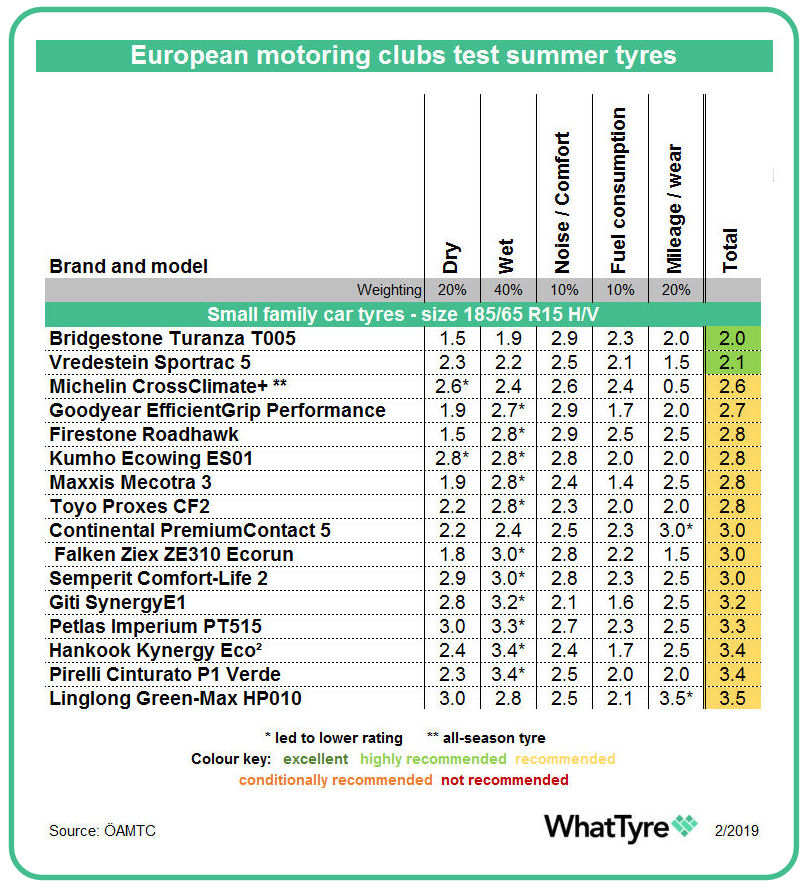 Here at WhatTyre we don’t need to see daffodils in bloom to know warmer weather awaits – for us, the appearance of the season’s first tyre tests is evidence enough. Today we have two for you. Both come from European motoring clubs the ÖAMTC (Austria), ADAC (Germany) and TCS (Switzerland). Here’s a wrap-up of the clubs’ joint test of 16 tyres for small family cars; we’ll take a look at their van tyre test separately.

Car tyres were tested in size 185/65 R15 H/V. As mentioned, 16 of them were evaluated, including the Michelin CrossClimate +, an all-season tyre by function if not by name. Tyre tester Friedrich Eppel from Austria’s ÖAMTC was generally satisfied with how the tyres performed: None finished with anything less than a ‘recommended’ rating. The Bridgestone Turanza T005 took top honours and the Vredestein Sportrac 5 was runner-up. Booth were rated ‘highly recommended.’

Not only did the Bridgestone tyre deliver the best wet grip performance, Eppel reported that “the Turanza T005 is also – together with the fifth-placed Firestone Roadhawk – the strongest on dry roads.”

The Sportrac 5, on the other hand, shone in the mileage/wear category, as did the Falken Ziex ZE310 Ecorun (which finished 10th), yet both were surpassed in this discipline by the CrossClimate +. Overall, mileage was an area in which performance varied greatly between the 16 tyres: The Linglong Greenmax HP010 earned the wooden spoon in this discipline by managing just 26,000 kilometres before reaching a tread depth of 1.6mm, less than half the 57,000 kilometres achieved by the CrossClimate +. Its dismal mileage guaranteed the Linglong tyre last place in the test.

But mostly it was how each tyre performed on wet surfaces that separated the top performers from the rest. Just four of the 16 tested tyres were surefooted in the wet. These were the ‘highly recommended’ tyres from Bridgestone and Vredestein as well as the Michelin CrossClimate + and the Continental PremiumContact 5.