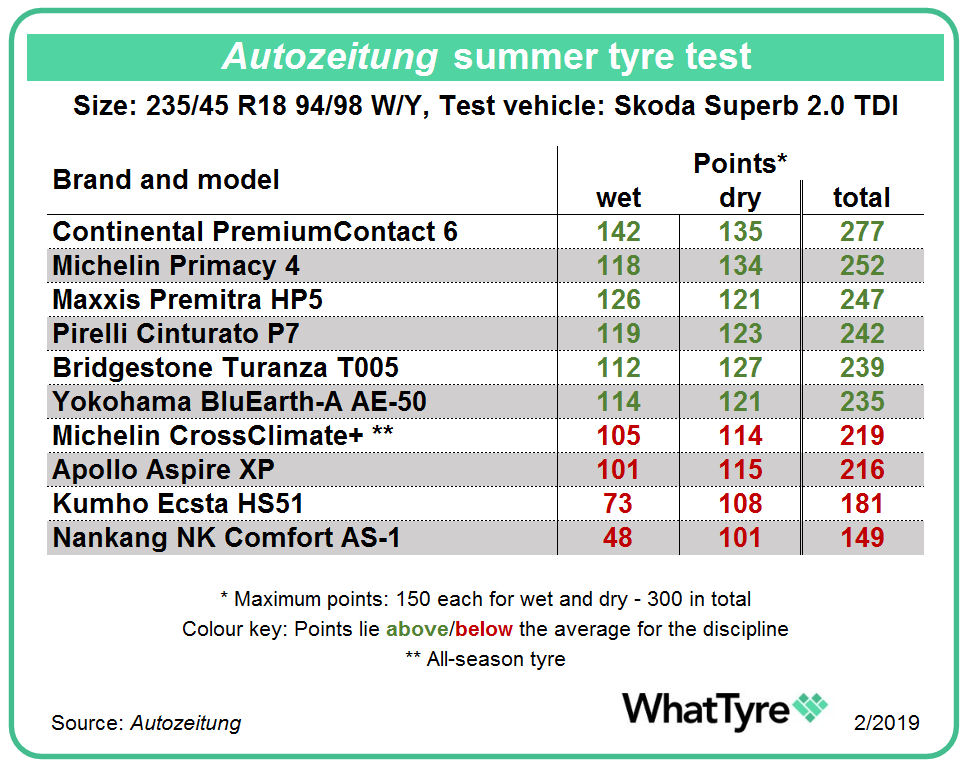 When evaluating tyres for the coming summer season, German motoring magazine Autozeitung looked at ten brands of 235/45 R18 rubber, a size commonly found on large family saloons and estates. Testing was conducted using a Skoda Superb and the results yielded a surprise or two: While we weren’t especially astonished to see the Continental PremiumContact 6 (runner-up in last year’s Autozeitung test) in first place and the Michelin Primacy 4 in second, the Maxxis Premitra HP5 entered unfamiliar territory by securing space on the podium – as far as WhatTyre is aware, this is the first time the Premitra HP5 has achieved a podium finish.

Having racked up an overall score of 277 points (out of 300), 25 more than the next-best result, victory for the PremiumContact 6 was never called into question. The Autozeitung’s tyre testers particularly praised the Continental tyre’s “maximum safety, high comfort and superior driving dynamics.”

The Michelin tyre was judged good in wet conditions and very good in the dry. Autozeitung also noted that the Primacy 4 was the most fuel-efficient tyre of the ten.

In the testers’ opinion, the Premitra HP5 from Maxxis performed at a “premium tyre level.” It finished in third place by scoring just five points less overall than its Michelin rival – indeed, it achieved a higher score in the wet disciplines than the Primacy 4. One minor drawback the testers noted was a slight trade-off in comfort.

The Cinturato P7 missed out on a podium place, yet the Pirelli tyre was commended for providing a “sporty driving experience” as well as for its short stopping distance in the wet.

It may have won the size 185/65 R15 H/V evaluation recently conducted by several European motoring clubs, but the Bridgestone Turanza T005 had to make do with a midfield result in the Autozeitung test. Harder to swallow may have been missing out on the ‘highly recommended’ rating given to both the Pirelli tyre and the Yokohama entry, which scored four fewer points than the Turanza T005. According to the Autozeitung testers, the Bridgestone tyre was denied this distinction as its “long wet braking distance prevented a recommendation.” It was nevertheless characterised as a “real good all-rounder.”

Sixth place was occupied by the Yokohama BluEarth-A AE-50. The testers said it “remained free of weaknesses” to the end of the series of tests, whereby it earned the ‘highly recommended’ rating.

The Michelin CrossClimate + was the only all-season tyre amongst the ten tested, and it put in a brave performance. Nevertheless, it had to give way to its summer counterparts in this test and finished in seventh place.

Although the Apollo Aspire XP was found to offer overall decent performance, the testers noted that the tyre reached the “limit” of its performance on wet surfaces.

The testers’ comment on the ninth-placed Kumho Ecsta HS51 was that “too little wet grip led to disappointingly long braking distances” in spite of the tyre’s high resistance to aquaplaning. Performance in the dry also failed to enthuse, and Autozeitung shares that the Kumho tyre “stopped just as weakly as the all-season tyre” it was tested alongside. The Ecsta HS51 nevertheless offered “okay” driving safety, albeit with high rolling resistance.

The last-placed tyre was separated from its Kumho rival by even more points than the test winner was from second place. Finishing a full 32 points behind with a total of 149 out of 300, the Nankang NK Comfort AS-1 was particularly weak in the wet. Here it only scored 48 points out of a possible maximum of 150. Autozeitung’s testers spoke of further problems in the wet, including “treacherous reactions at the (performance) limit” and “little stability at speed.” Dry performance was also shoddy in comparison to the other nine contenders.