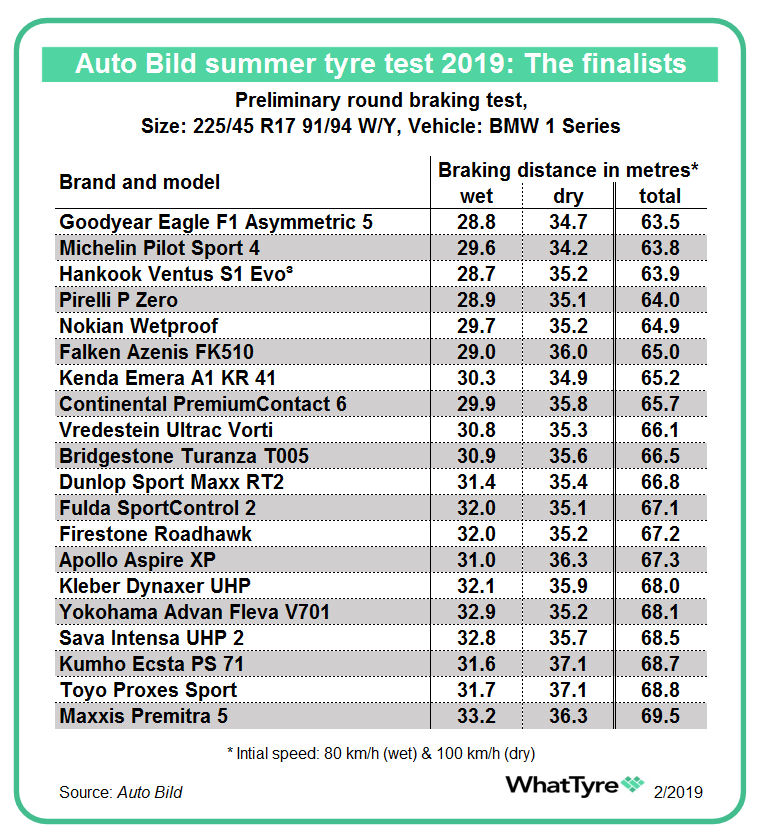 Thank you for taking part in the initial stage of our 2019 summer tyre test. The standard of applicants was very high, and after reviewing your aptitude in the wet and dry braking challenges, we have decided you won’t progress to the final round of testing on this occasion. We wish you every success in your future endeavours.

Of the 53 entries in this year’s Auto Bild test of size 225/45 R17 91/94 W/Y summer tyres, following the said evaluation of braking performance all but 20 received the tyre equivalent of a rejection letter.

Wet and dry braking tests have long been the German motoring magazine’s preferred means of weeding out poor performers. This time round a BMW 1 Series was used for the challenge, and testers from Auto Bild observed how long each set of tyres needed to stop on wet (from 80 km/h) and dry (from 100 km/h) road surfaces. The aggregate results were then compared and the 20 best performers earmarked for further, in-depth testing. These are the finalists progressing to the next round:

Some of the budget candidates took five metres longer to stop from 100 km/h in dry conditions than the best in test, and in the wet the Milestone and Star Performer tyres needed an additional ten metres when coming to a standstill from 80 km/h. The testers also highlighted a particularly disturbing result: A couple of manufacturers, companies who know how to make a grippy tyre, didn’t.

“The braking performance of the Viking and Laufenn summer tyres was surprisingly poor, their total braking distances pushed them down to 44th (Laufenn) and 46th (Viking) place,” commented Auto Bild. The reason for this surprise is that the Viking tyre brand belongs to none other than Germany’s Continental, while Hankook Tire, producer of the respected Hankook brand, also makes Laufenn. “We’d expected more from brands that belong to major manufacturers such as Continental and Hankook,” the testers added.