Auto Express said the Blizzak LM005’s performance in the wet was a key factor in the victory. And what’s more, the tyre boasts an ‘A’ tyre label grade for wet grip across the full range. However, there were strong performances from Hankook’s Winter i*cept RS2 (2nd) and Michelin’s Alpin 6 (3rd). At the same time, we have to note that Hankook Goodyear and Dunlop each won individual categories as well as Bridgestone, of course. Looking forward, Continental’s TS 870 has to be described as the one that got away because it’s market-beating performance couldn’t be counted owing to the fact the Covid-19 pandemic has delayed the new tyre’s release for a year.

Commenting on the Bridgestone’s Blizzak LM005’s win Auto Express stated: “Thanks to standard-setting wet performance, the Blizzak is an ideal tyre for British winters, which see far more rain than snow on the road. It was its superb performance in the wet tests that set up the Blizzak to take an overall win. It’s the only tyre on test with an ‘A’ rating and, while label ratings don’t always match our results, they do here. It took three wins and two runner-up positions in the wet tests.”

Bridgestone and Continental aside, there was tough competition at the top of the market. Hankook’s Winter i*cept RS2, for example, won the wet circle test and came second in wet handling by the slightest of fractions, taking second place overall. The third-placed Michelin Alpin 6 should also be lauded for its “well-deserved” second consecutive podium position. Meanwhile, the Goodyear UltraGrip Performance + led the field both in terms of curved aquaplaning performance and snow traction. The Dunlop Wintersport 5 also took a brace of category wins, with first place in snow braking and cabin noise – all proving that there is stiff competition at the top of the market.

The podium aside, positions four, five and six were incredibly close together, separated by just 0.2 per cent. The fourth-placed Pirelli Cinturato Winter was noted for its snow capability, while the fifth-placed Goodyear Ultragrip Performance + was lauded as “great on the snow”. However, as it was within 0.4 per cent of the podium and 0.2 per cent of the Goodyear and Pirelli tyres, sixth position probably doesn’t do the Falken Eurowinter HS01 justice. 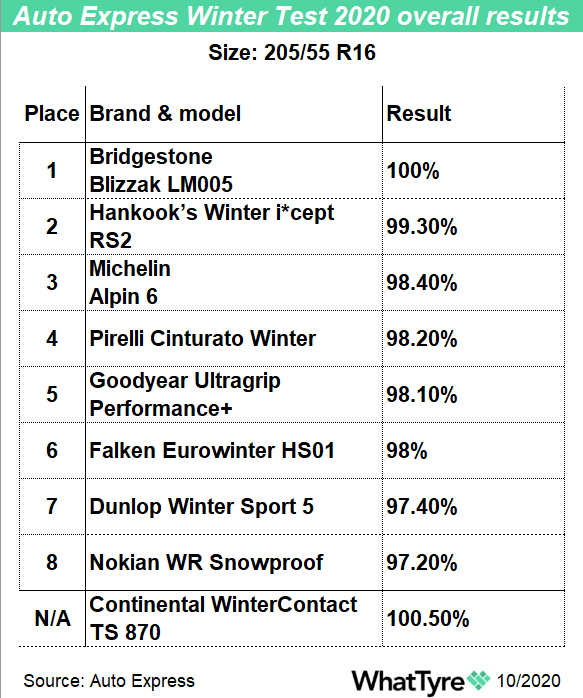 An absence of alps, infrequent sub-zero temperatures and scant snowfalls make winter tyres a hard sell in the UK. And as we’re not legally required to fit our cars with them, we generally don’t. A minority of British motorists nevertheless fit winter tyres for a range of reasons, and when purchase time comes around it is important for them to make informed choices. European tyre tests are a useful source of knowledge here.
Read Article

Three leading European motoring associations have published the results of their joint 2020 winter tyre test. The ADAC from Germany, Austria’s ÖAMTC and Swiss club TCS looked at 15 brands of tyre While they didn’t award any of the evaluated products their top ratings of ‘very good’ (ADAC) or ‘excellent’ (ÖAMTC, TCS), the clubs noted that overall test results were positive. In addition to five strong performers, seven further tyres were recommended and one conditionally recommended. Only two tyres failed to make the grade.
Read Article

The latest issue of Auto Bild warns drivers not to buy a pig in a poke. Test results rather than blind luck should guide tyre purchases. To help in this area the motoring publication has now shared the outcome of its 2020 winter tyre test. This evaluation of size 245/45 R18 tyres for executive cars (Auto Bild used a BMW 5 Series for testing) compares the 20 best performers from an initial field of 51 tyre brands subjected to wet and snow braking tests. Six of the brands received Auto Bild’s top ‘exemplary’ rating.
Read Article