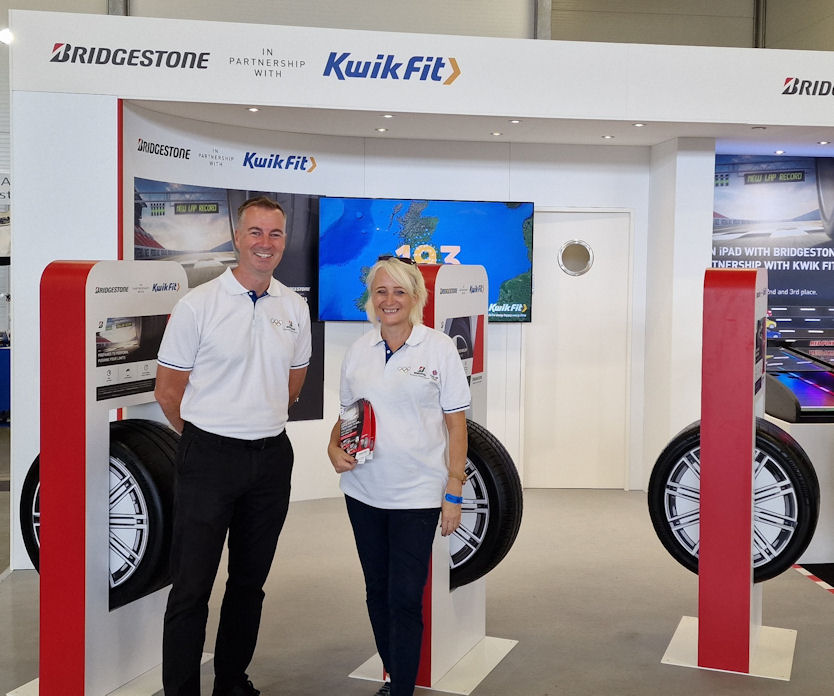 Bridgestone has brought its award-winning tyre range to life to scores of onlookers on the first day of the British Motor Show 2022 – and is urging thousands more to come and find out about its premium products over the next three days.

Bridgestone, partnering with Kwik Fit, is sponsoring Hall 5 at the show along with the motorsport arena. The Bridgestone stand in Hall 5 is also set-up in partnership with Kwik Fit and also features an interactive car game, where an iPad is up for grabs for the fastest time, while a daily prize draw is also giving visitors a chance to win up to £150 in gift cards.

And to add even more interest in Bridgestone’s presence, influencer Thomas Exton will be filming live from the show to his online audiences.

“It has been incredible to interact with such a huge audience so far, so many of whom are long-standing fans of our tyres, and are keen to know more about our products and services,” says Helen Roe, Bridgestone’s Consumer & Brand Sponsorships marketing manager. “The stand has been packed since the doors first opened and we are attracting so much attention from so many people of all ages, who not only seem to appreciate the technology behind our products, but want to find out where their nearest retailers are to get them fitted in the future.

“Bridgestone is synonymous with innovation, prestige and excellence in motorsport, which is why this is such a great event to be at. We hope to welcome many more to our stand right up until Sunday afternoon,” Roe continues.

The British Motor Show runs until 21 August at Farnborough International. Building on the success of its scheduling at last year’s show, The Live Arena – featuring stunt shows, car reviews, supercars and more – will be hosted again by Wheeler Dealer, Mike Brewer. Mike will be supported by petrolhead and Olympic silver-medal sprinter, Iwan Thomas. The Family Zone will also be extended in 2022 to feature a unique car-themed escape room, as well as popular features from 2021 including car wrapping and The Racing Bug’s racing simulator.