There were no nasty surprises in this year’s Auto Bild summer tyre test. A knockout round of wet and dry braking tests had already rooted out any mad, bad and dangerous to know tyres. All of the 20 candidates remaining from the original field of 53 gave a good account of themselves in the expanded test round. Six of their number even received Auto Bild’s top ‘exemplary’ rating.

As in the knockout round, Auto Bild looked at the tyre size 225/45 R17. A BMW 1 Series was chosen for testing.

Michelin’s Pilot Sport 4 gave the best second-round performance. It was joined on the winners’ podium by three tyres. The Goodyear Eagle F1 Asymmetric 5 was named runner-up; third place was shared by the Falken Azenis FK510 and Hankook Ventus S1 Evo³.

The Michelin tyre scored top marks for testing in wet and dry conditions, but suffered when on price. The Pilot Sport 4 isn’t a cheap tyre, something we confirmed with a visit to the Michelin-owned Blackcircles.com site. There the tested size currently sells for £94.50 (fully fitted). In addition, the Michelin tyre’s rolling resistance was only average.

A sizeable price tag also accompanies the Goodyear Eagle 1 Asymmetric 5, but buyers get a long-lasting tyre for their money. It delivered 54,200 kilometres / 33,680 miles during testing; this sufficed for top marks (jointly with the Continental PremiumContact 6) in the cost category. Overall, Auto Bild found no cause for complaint in the wet or dry, but considered comfort levels no better than average.

For the Hankook, comfort proved an area of weakness in a tyre that was otherwise highly regarded. Auto Bild found the Ventus S1 Evo³ well balanced, with “precise steering behaviour with good response on dry surfaces, optimal delay in the wet and moderate pricing.”

Continental, darling of many a tyre test, finished this one in fifth place. The PremiumContact 6 was judged balanced and safe in the wet. Braking/stopping distances were short in the wet and dry. Auto Bild also praised the tyre’s “fuel saving rolling resistance, high mileage and good economy.” On the flipside was “a modest aquaplaning safety margin.”

The last of the six tyres to gain an ‘exemplary’ rating was the Fulda SportControl 2. Its mileage was only “average”, otherwise the Auto Bild testers reported no serious weaknesses.

And seven that are ‘satisfactory’

The Yokohama Advan Fleva V701 finished 14th from 20 and was the first ‘satisfactory’ tyre. It was held back from a better result by “moderate grip and steering precision in the wet” plus below-average mileage. It was a similar story for the Toyo Proxes Sport, although this lacked grip in the dry and also exhibited high rolling resistance. For the Kleber Dynaxer UHP, Auto Bild reported “just satisfactory wet (weather) qualities, imprecise and understeering wet and dry handling, minimal aquaplaning characteristics.”

The Maxxis Premitra 5 enticed with low purchase price and good rolling resistance, while the Firestone Roadhawk impressed with its short stopping distance in the dry. That said, both came with drawbacks that couldn’t be overlooked. These included: “Slight understeering driving characteristics on wet and dry roads, delayed steering response, moderate mileage” for the Maxxis tyre and “understeering handling, limited steering precision and response, limited aquaplaning safety and comfort” for the Firestone.

Second to last place was occupied by the Kenda Emera A1 KR 41. The Kenda tyre performed well in wet testing, including aquaplaning: This prompted Auto Bild to declare “a sovereign performance that even overtook the products of industry giants such as Continental and Dunlop.” The Emera A1 also delivered a short dry stopping distance. But these strengths were paired with weaknesses in dry handling (a slight understeer was observed here) and mileage; the latter, at 28,100 kilometres / 17,460 miles, was little over half that of the Goodyear Eagle 1 Asymmetric 5.

The uncoveted wooden spoon was thrust into the hands of the Kumho Ecsta PS 71. But don’t forget that the Kumho tyre actually achieved 20th place in a test of 53 products, and its rating of ‘satisfactory’ is by no means a poor result. The Ecsta PS 71 was credited with “good wet and aquaplaning characteristics” as well as “decent dry handling.” However, its mileage was unimpressive – just 26,500 kilometres / 16,470 miles. The tyre also gave high rolling resistance. 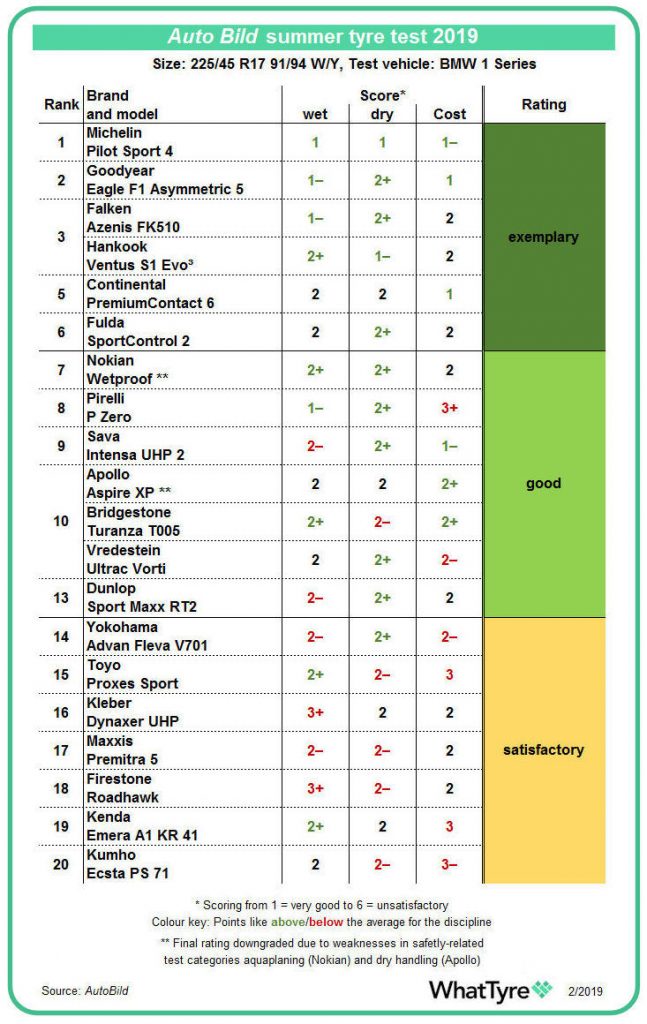 Who is Auto Bild?

Based in Germany, Auto Bild is Europe’s biggest consumer automotive magazine. As of Q3 2018 the title had a circulation of 343,524 copies. Auto Bild’s annual summer, winter and all-season tyre tests are considered to be amongst the most authoritative comparative evaluations of tyres sold in European markets.