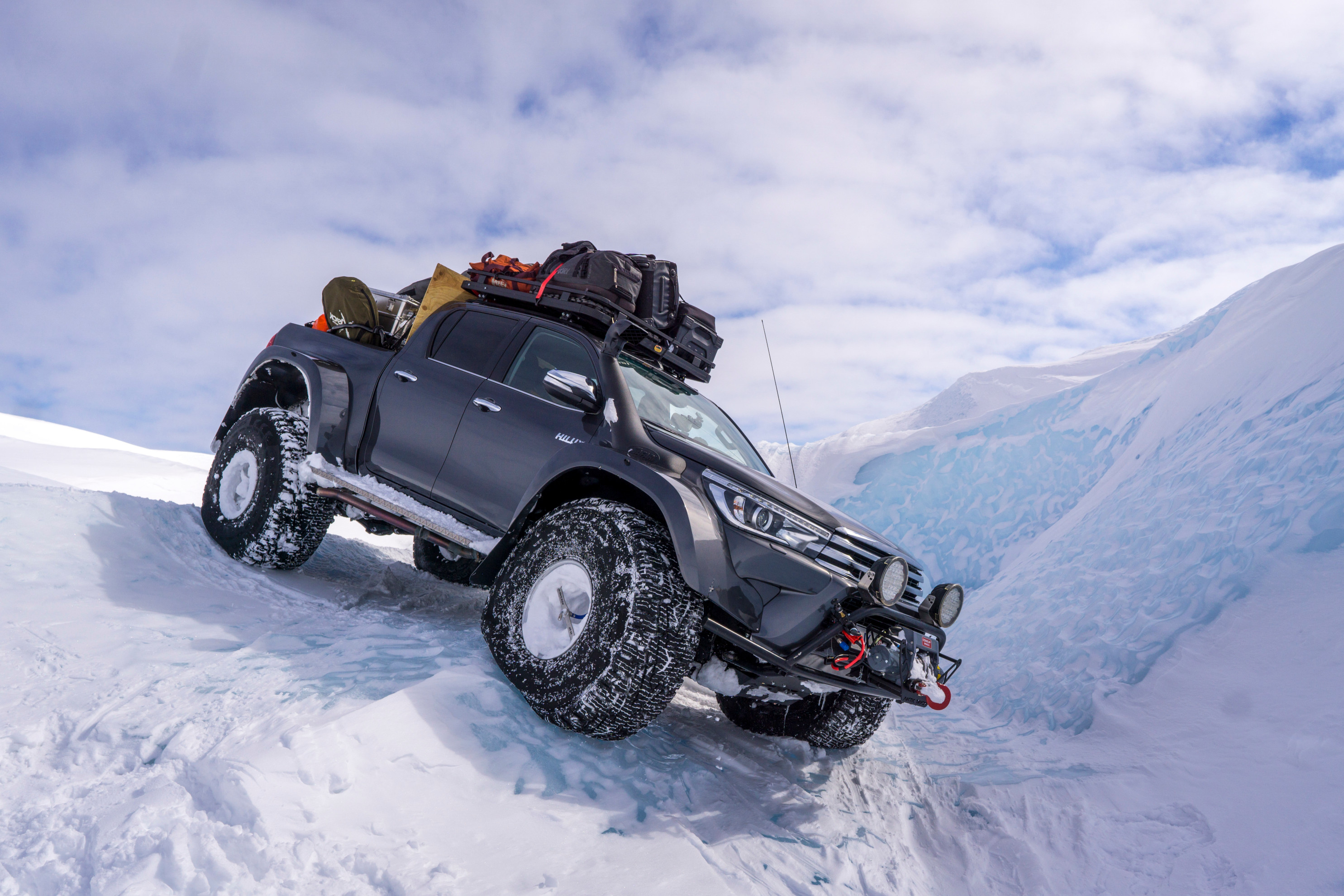 Snow is rare in most of Britain at the best of times. This year’s mild winter means it is even more difficult to imagine what it felt like for seven men and their three vehicles to face 5,000 kilometres of ice over a period of 20. Still that’s what Icelandic-American expedition team Expeditions7 went through recently when they drove from the southern coast of Greenland to the land’s northernmost spot and back. One of the team’s special vehicles built by Arctic Trucks was equipped with Nokian Hakkapeliitta 44 tyres. These are tailored what Nokian calls “real winter”. Now that’s an understatement. White-outs with zero visibility made it a unique challenge at times. On the slowest legs of the journey, the vehicles could only manage 10 kilometres per hour and the lowest recorded temperatures were -40 degrees Celsius!

The Nokian Hakkapeliitta 44 tyres must have been tested to the limit. The Expeditions7 team started from Isortoq in the southern tip of Greenland and headed north toward Wulff Land at its northern extreme. For the most part, the journey took place on top of the continental glacier, which is several thousand kilometres long and over three kilometres thick at certain points.
During the journey, the members of the expedition logged weather information and collected snow and ice samples they later handed over to universities for research purposes. The expedition lasted nearly three weeks before the group arrived in the Sisimiut village on the west coast of Greenland. The total distance travelled was 5,169 kilometers.

The hardest part was setting off and finding a safe route from the sea ice onto the thick continental ice sheet, said Emil Grimsson, one of the founders of Arctic Trucks, who also took part in the expedition:

“We were driving on the thin river ice when one of our vehicles fell in. Fortunately, it was the worst thing that happened, and we were able start our journey only a few days later than planned.”

However, Greenland was reportedly as beautiful as it was arduous: “Seeing the size of the glacier in its entirety was breath-taking,” Grimsson said, adding: “Arriving in Wulff Land after days of driving on ice was also memorable. The place was impressive…almost surreal. I’m not sure anyone has ever driven a car that far north.”

In order to achieve its goal the expedition relied on state-of-the-art equipment to survive glaciers, rocky terrain and soft snowbanks. The team chose three custom-built vehicles from Iceland-based Arctic Trucks – the same types of vehicles used for Antarctic expeditions. The newest of the vehicles was equipped with high-performance Hakkapeliitta 44 tyres from the world’s northernmost tyre manufacturer, Nokian.

One Nokian Hakkapeliitta 44 tyre weighs 70 kilograms and is over one metre in diameter. The rugged tyre came to life a couple of years ago as the result of a long cooperation between Nokian Tyres and Arctic Trucks.

You can adjust the length of the tyre’s contact surface by regulating the inflation pressure. A wide tyre has better load-bearing capabilities and will not sink as deep into the snow as a narrow tyre.

The members in the expedition team were: Greg Miller (leader), Scott Brady, Clay Croft, Dr. Jon Solberg, and Kurt Williams from the United States, and Emil Grimsson (co-leader) and Torfi Johannsson from Iceland.