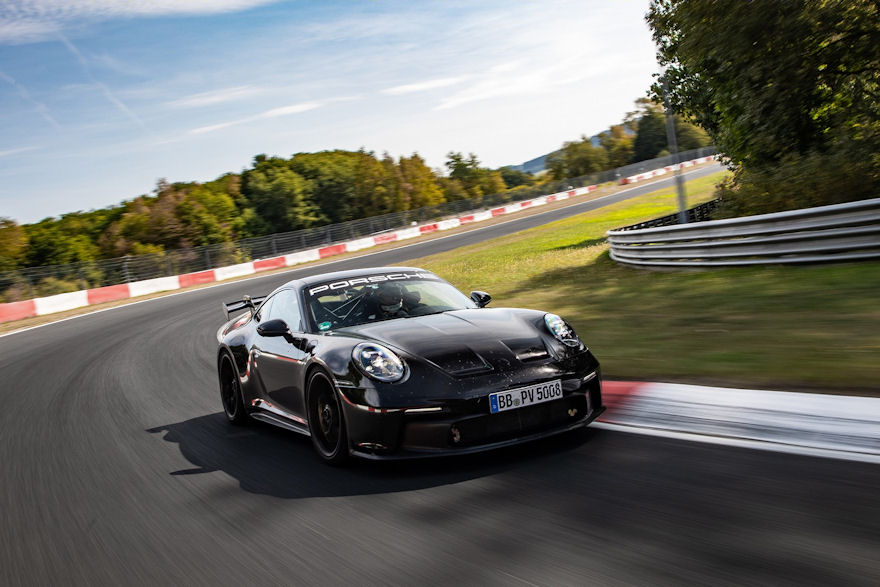 The seventh generation of the Porsche 911 GT3 (992) will wear Michelin Pilot Sport Cup 2 tyres as one of its original equipment fitments. Michelin is also offering its Pilot Sport Cup 2 R Connect as a dealer-fit option “for those who wish to push on-track performance to the limit.”

In testing undertaken by Porsche on the 20.8-kilometre (13-mile) Nürburgring Nordschleife circuit in Germany, a 911 GT3 fitted with the Pilot Sport Cup 2 R Connect tyres posted a lap time of 6 minutes 59.927 seconds. While setting this time, the more frequently used reference lap distance of 20.6-kilometres was despatched in an equally impressive 6 minutes 55.2 seconds.

“The combination out of the new Porsche 911 GT3 and the Michelin tyres feels incredibly balanced. The grip is super high and the response and driveability are on another level,” commented Porsche test driver Lars Kern after setting the lap time.

The car that Kern drove was fitted with Michelin Pilot Sport Cup 2 R Connect in 255/35 ZR 20 front and 315/30 ZR 21 rear sizes – these are the same dimensions as the original equipment Pilot Sport Cup 2 tyres. All feature the ‘N-0’ marking on the sidewall to denote Porsche’s engineering department’s approval of these completely new tyre designs.

During its preparations for the Nürburgring tests, Porsche evaluated tyres from three different manufacturers at the Hockenheim race circuit. Michelin says the carmaker ultimately selected its Pilot Sport Cup 2 R Connect “because it offered the best track performance.”

Developed for drivers “who want the ultimate performance during days on track,” the Pilot Sport Cup 2 R Connect combines a casing design based on that of the Pilot Sport Cup 2 with motorsport rubber compounds. The tyre also comes ready to be fitted with Michelin Track Connect sensors that enable them to be used with the Michelin Track Connect smartphone application. This application allows drivers to constantly monitor tyre pressures in real time so that they can be adjusted to achieve optimum performance when circuit driving.

The OE Michelin Pilot Sport Cup 2 has been designed specifically for the new 911 GT3 and utilises newly-developed dual rubber compounds front and rear. Michelin says the tyre features “technologies developed at the highest levels of global motorsport” – technologies now available to road drivers as per Michelin’s ‘Track to street’ philosophy.

Porsche and Michelin extended their cooperation agreement for a further four years at the beginning of October 2020. In addition to the development partnership in the production vehicle sector, they reconfirmed their cooperation in motorsport: Michelin is the exclusive partner of Porsche Motorsport in the GT works program WEC and the majority of the international Porsche one-make cup series, including the factory-organised Porsche Mobil 1 Supercup. In addition, an extensive declaration of intent for future projects was formulated, with the focus on sustainability in all areas.