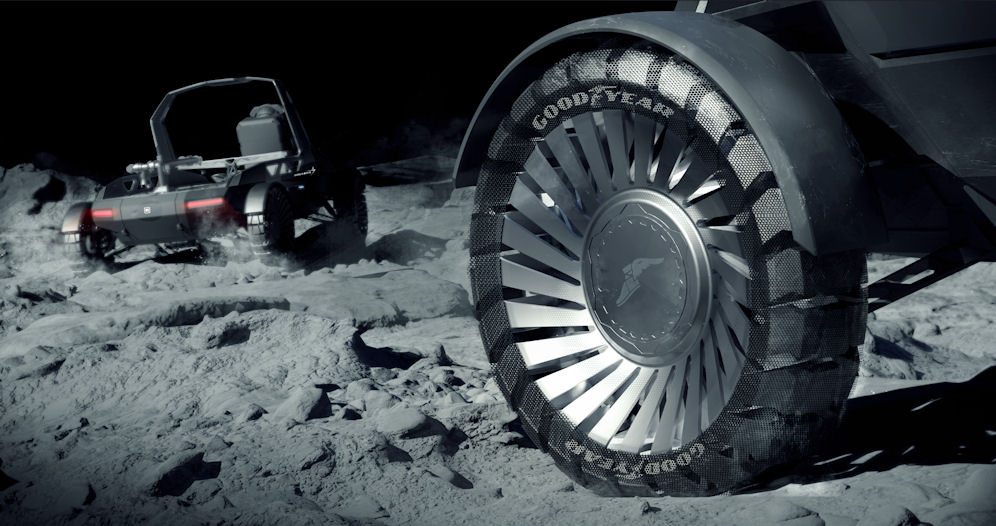 When Apollo 11 touched down on the surface of the Moon on 20 July 1969, it was also a giant leap for The Goodyear Tire & Rubber Company. Goodyear provided a number of essential components for this history-making mission and later supplied non-pneumatic tyres for the Apollo Lunar Roving Vehicle. The tyre maker is once again looking spacewards and is developing tyres for a lunar vehicle that in future may bring private enterprise to the Earth’s rocky satellite.

NASA aims to send humans back to the Moon under the Artemis programme in 2025, and last year called for industry approaches to develop a lunar terrain vehicle that will enable astronauts to explore a greater area of the Lunar surface than ever before. Michelin reported earlier in 2022 that it was working with Northrop Grumman to make a tyre capable of resisting the extreme conditions at the lunar pole, and now Goodyear has announced it is collaborating with Lockheed Martin and contributing decades of tyre development expertise to a programme that aims to establish the first extended-use commercial vehicle operations on the Moon.

The Apollo lunar rovers of the 1970s were purposely built for just a few days of use on excursions within five miles of their landing sites. Future missions will need to traverse rugged terrain over much longer distances while operating in greater temperature extremes. Goodyear will thus need to develop new tyres capable of lasting years and surviving -140ºC during the Lunar night and around 120ºC in the day.

“NASA’s Artemis programme to live and work on the Moon has a clear need for lunar surface transportation that we intend to meet with vehicles driven by astronauts or operated autonomously without crew,” says Kirk Shireman, vice president of Lunar Exploration Campaigns at Lockheed Martin. “We’re developing this new generation of lunar mobility vehicle to be available to NASA and for commercial companies and even other space agencies to support science and human exploration. This approach exemplifies NASA’s desire for industry to take the lead with commercial efforts that enable the agency to be one of many customers.”

The starting point for Goodyear’s lunar tyre development is its earthbound airless tyre technology already found on micro-mobility, autonomous shuttles and passenger vehicles. The partners are applying existing expertise to the project including testing concepts in lunar soil test beds. For Goodyear, the programme is a two-way street that will also aid its future development of non-pneumatic tyres for more everyday applications.

“Everything we learn from making tyres for the Moon’s extremely difficult operating environment will help us make better airless tyres on Earth,” comments Chris Helsel, senior vice president, Global Operations and Chief Technology Officer at Goodyear. “This will contribute to our end goal of enabling mobility no matter where it takes place. Just as important, it is an honour to write history with this prestigious company who knows how to make giant leaps in exploration and mobility.”