Everton and Davanti Tyres have used their partnership to help a local grassroots football club which lost all its sporting and fitness equipment in an arson attack. MSB Woolton FC, which hosts 151 teams at its Camp Hill base in south Liverpool, was devastated after storage units packed with all their goalposts, balls, cones, boots and bibs, was set ablaze last month. Club volunteers quickly reacted by fundraising; Everton Global Tyre Partner Davanti Tyres, which has Merseyside roots and is based near the city, have made a generous £3,000 donation to help the fund on its way.

While volunteers and parents source equipment for training sessions, youngsters from a couple of MSB Woolton’s junior teams were invited for a special coaching experience at Finch Farm courtesy of Everton’s Academy. The sessions gave youngsters access to elite coaching and some of the best facilities available in the game. Davanti used the opportunity to surprise the club manager and volunteers with its financial boost.

Colin Windrow, club manager at MSB Woolton, said: “We didn’t know about this donation and I’m blown away by the generosity.

“There’s a strong bond between us and Everton Football Club and some good friends of mine there asked ‘how can we help?’.

“All of a sudden, we’ve put on this fantastic evening for these fortunate young children – and our next step is to spend this money on the children and get the club back to a level where we can build again going forwards.

“It’s been an incredible response to what happened. Everyone has come together and the grassroots community of football has convinced me to say ‘let’s go again’.”

Colin recalled: “It was a few weeks ago when I got the call from the Police and the Fire Brigade, saying our hut, which has been housing all our equipment for the past 30-odd years, had burned down.

“When I went to Camp Hill and saw the devastation, I had a little cry. All the balls, the goals and even the boots, which we have an exchange for, because children can’t afford them, had all melted.

“From being so down, to where we are now is just amazing and the community spirit has been just unbelievable.” 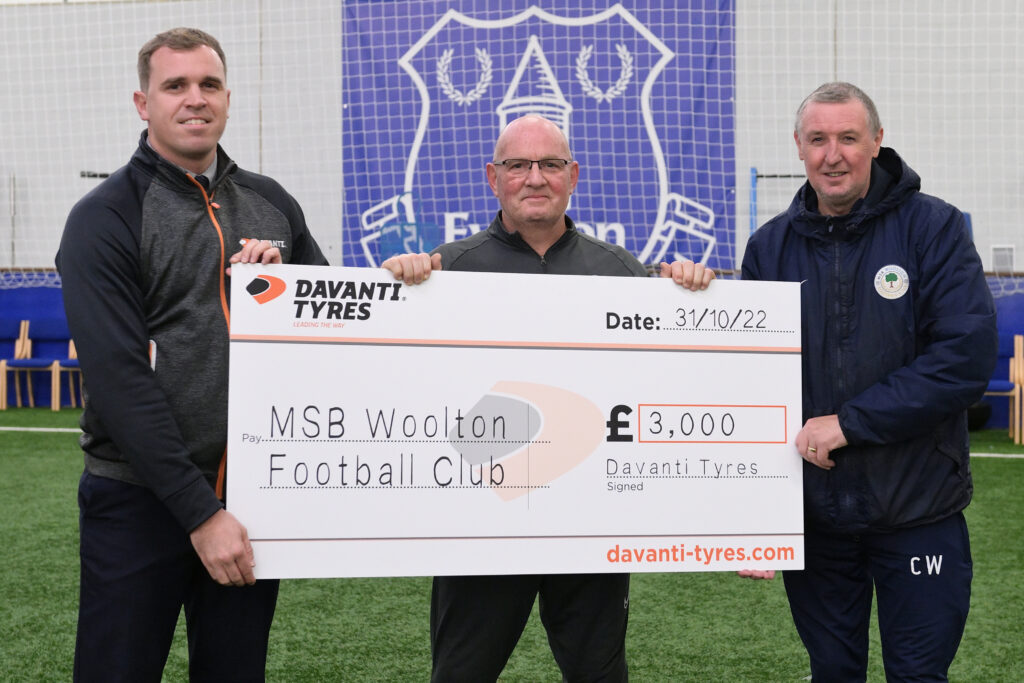 One of Europe’s largest grassroots clubs

MSB Woolton can lay claim to being the largest grassroots club in Europe, with teams ranging from U4s to U17s, multiple girls and women’s, disabled and veterans’ teams, and 284 volunteers helping to ensure things run smoothly.

Chris Saunders, UK brand manager for Davanti Tyres, revealed a personal interest in helping to get the football club back on track.

He said: “I live locally and as a kid I played football for Woolton at Camp Hill, where the incident occurred.

“When the news came through it was very shocking, so it means a lot more to help out. We are a big, global brand but our roots are local, so any opportunity we get to give back to the local community, we take.

“Through our partnership with Everton, we’ve been very lucky to do that now on a few occasions over the years.

“It’s very difficult to keep clubs running and buy equipment and it’s absolutely devastating what happened, but we look after each other in Liverpool and we are very happy to be able to give something back.”

The hour-long coaching session at Finch Farm saw around 30 youngsters put through their paces and Ian Lavery, Academy Recruitment Trialist Manager at Everton, was delighted to play host to a grassroots club with a long-standing affiliation to the Blues.

He said: “We can’t do our job without these boys. Everyone starts out at a grassroots football team and Woolton is a good place to start.

“I remember years ago, Woolton first started with just a small number of clubs and now they are arguably the biggest in Europe. We like what they do. They fit our family values by being a really family-orientated club and we have had good connections in that time.

“They have supplied us with players, as I’m sure they have with most clubs in the north west. We just buy into their ethos and you couldn’t imagine their feelings when they turned up on that morning and there was no hut, equipment or anything.

“Their life’s work went up in smoke, so to see the boys’ faces here and, through our contacts, to be able to add to their funding is unbelievable.

“Davanti has been brilliant. They were the first to say they wanted to help – as did we – and it was a pleasure to be able to do so.”